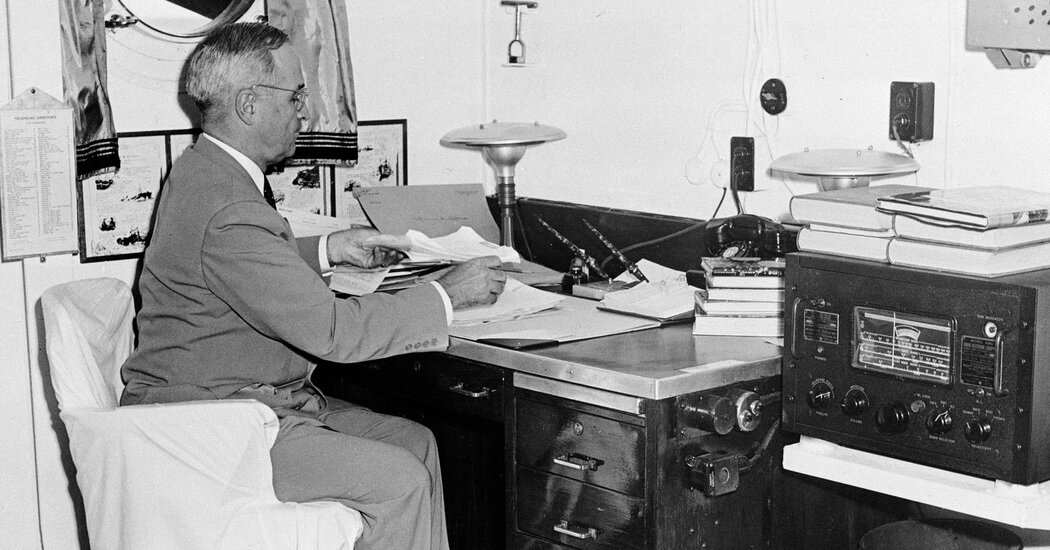 Every August, newspapers are dotted with stories of Hiroshima and Nagasaki, accompanied by a well-picked-over — but never resolved — debate over whether atomic bombs were needed to end the Asia-Pacific war on American terms. What is left to learn 75 years (and with so much spilled ink) later? For Mark Gallicchio, the answer is in the domestic politics of the United States and Japan, which drive a narrative that unwinds less like a debate than a geopolitical thriller.

“Unconditional” offers a fresh perspective on how the decision to insist on “unconditional surrender” was not simply a choice between pressing the Japanese into submission or negotiating an end to the conflict. It also traces ideological battle lines that remained visible well into the atomic age as the enemy shifted from Tokyo to Moscow.

President Harry Truman believed unconditional surrender would keep the Soviet Union involved while reassuring American voters and soldiers that their sacrifices in a total war would be compensated by total victory. Disarming enemy militaries was the start; consolidating democracy abroad was the goal. Only by refusing to deal with dictators could Germany and Japan be redesigned root to branch.

But Truman faced powerful opposition from the Republican establishment, including the former president Herbert Hoover and Henry Luce, whose Time/Life media empire presaged Fox News today. Republicans fought Truman on two fronts: First, they sought to undo New Deal social and economic reforms; second, they argued that giving Japan a respectable way out of the conflict would save lives and, at the same time, block Soviet ambitions in Asia. Conservatives believed the left in the United States was more determined to use unconditional surrender to destroy Japanese feudalism than to confront Soviet ambitions — future manna from heaven for postwar redbaiters like Senator Joseph McCarthy.

Gallicchio characterizes conciliatory State Department “Japan hands” as dupes of cosmopolitan Japanese who persuaded them that Japan’s emperor was actually a progressive who would help America build a stable, anti-Communist East Asia. But New Deal Democrats believed these experts did not know what they did not know about Japan. And prefiguring neoconservatives of a later era, they insisted that only the deposition of the emperor — as part of a full transformation of the country’s political culture — would usher Japan into a peaceful postwar community of nations.

The left-wing journalist I. F. Stone joined the fray. He railed against “reactionaries” who he said were determined to stir a red scare to roll back reform in America, purge progressive officials and deliver a conditional unconditional surrender to their friends in Tokyo. Gallicchio, the author of several books of military history, sorts out these players — and many others — with great clarity, noting that Truman played coyly with both sides as the war shifted decisively in the Allies’ favor.

Convinced that the Japanese would not surrender short of a final, decisive battle — or (once the A-bomb was available) a final incendiary event — Truman was unwilling to suggest American resolve was weakening. He used the Potsdam Declaration of July to remind the Japanese that only more devastation awaited if they held out. He understood that imperial cooperation would ease the difficult task of disarming 5.5 million Japanese soldiers — and he ultimately spared Hirohito — but he would not guarantee the emperor’s status before the end of the war.

Japan’s leaders felt little urgency. The imperial military had amassed an astonishing number of troops for a desperate homeland defense, while politicians fantasized about a Soviet-brokered peace. Lacking a guarantee of his safety, the emperor supported the effort to reach out to Moscow and busied himself with protecting sacred relics. Even after the first A-bomb incinerated Hiroshima, he asked the government to seek Allied concessions, underscoring Gallicchio’s claim that Japanese officials “seemed uncertain of what they were doing.”

With the Red Army suddenly deep into Manchuria, Japanese leaders were weighing evaporating options when the second bomb incinerated Nagasaki. What had been chimeric was now clearly delusional.

The emperor finally intervened. Overruling his generals, he broadcast a decree Gallicchio sardonically calls “almost comically evasive” because it omitted the words “surrender” and “defeat.” While many Japanese were confused and saddened, they accepted the emperor’s most famous edict to “endure the unendurable.” Some military officers, though, committed suicide after a failed mutiny on what has become known as “Japan’s longest day.”

Gallicchio deftly recounts how debate about Truman’s decision persisted well after the surrender. In Japan, aggressive reforms early in the occupation were opposed by the same Western-educated Japanese who had influenced America’s Japan hands. These elites were keen on defanging the Japanese military, but tried to block land, labor and electoral change.

“Unconditional” documents how conservatives back home targeted New Dealers within the occupation as Communist sympathizers and hatched revisionist histories of Truman’s motives, exaggerating the emperor’s antimilitarism. Their revisionism was replaced by a New Left brand in the 1960s. Truman, some now argued, instigated the Cold War by trying to intimidate the Soviet Union with America’s nuclear might.

In 1995, a half-century after the war, the debate was reignited when curators at the Smithsonian Institution tried unsuccessfully to use this account of United States aggression to frame an exhibition in which the Enola Gay, the plane that dropped the A-bomb on Hiroshima, was the leading artifact. “Unconditional” is a sharp reminder of the power, imperfection and politicization of historical narrative — and of the way debates can continue long after history’s witnesses have left the stage.