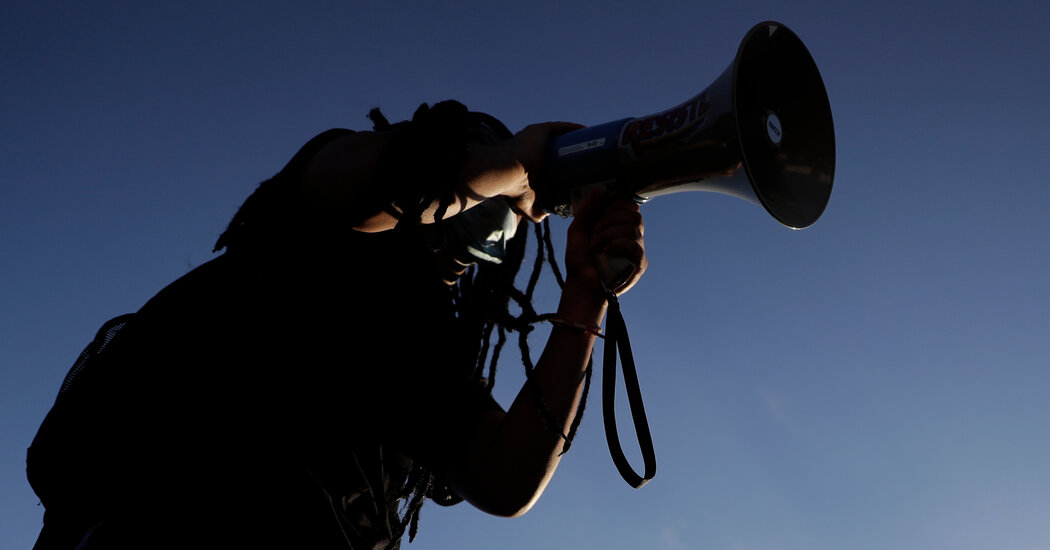 The stories it tells become our greatest religions, the credos of great nations and the mantras of our greatest wars.

The ways in which we define people and things can be liberating or trammeling; they can advance the cause of liberty and equality or cause societies to regress.

Perhaps no other word of the moment is so under attack as “woke,” a word born as a simple yet powerful way of saying: “Be aware of and alert to how racism is systemic and pervasive and suffuses American life. Wake up from the slumber of ignorance and passive acceptance.”

But because of its petit power, this small word was a prime candidate for co-option, for being turned against the people who used it. The opponents of wokeness — whether they be conservatives who believe it injures the ideal of America as inherently good, or moderate Democrats worried that it handicaps their electoral prospects — want to kill it.

Republicans want to recast “wokeness” as progressive politics run amok, and many establishment Democrats shrink from the term because they either believe that Republicans have succeeded at the task, or, of even more concern, they agree with those Republicans.

Being awake to and aware of how our systems of power operate creates enemies across the political spectrum because wokeness indicts both Republicans and Democrats alike. Wokeness indicts the status quo.

And so, wokeness has been referred to in the most hyperbolic language imaginable, from ideology to religion to cult. It has been so derided and adulterated that young people who are what one would have called woke five years ago no longer even use the term.

Perhaps nothing helps to illustrate the chasm between moderates and progressives as well as a skirmish last week between the Democratic strategist James Carville and the Democratic Representative Alexandria Ocasio-Cortez.

On “PBS NewsHour,” Carville was asked what went wrong with the Democratic Party to enable Glenn Youngkin to win “53 percent of suburban voters in Virginia,” when only last year Donald Trump won just 45 percent.

“Well, what went wrong is this stupid wokeness,” Carville responded. Broadening his response to races in cities across the country, he blamed the “defund the police lunacy” and said “some of these people need to go to a woke detox center or something.”

But then he brought it back to language. “They’re expressing language that people just don’t use. And there’s a backlash and a frustration at that,” Carville said, adding: “We have got to change this and not be about changing dictionaries and change laws. And these faculty lounge people that sit around mulling about I don’t know what are — they’re not working.”

Ocasio-Cortez had a different view: In an Instagram story, she said she thought the results showed “the limits of trying to run a fully, 100 percent, super moderated campaign that does not excite, speak to or energize a progressive base.”

She never invoked wokeness, but that didn’t stop local news outlets from running an article from the Sinclair Broadcast Group about her comments under the headline, “AOC Says McAuliffe Lost Because He Wasn’t ‘Woke’ Enough, Carville Says the Opposite.” (The headline was later changed to “AOC Says McAuliffe Lost Because He Didn’t Energize a ‘Progressive Base.’”)

To be clear: Democrats didn’t lose Virginia because progressives were too “woke.” They lost because Youngkin lied about critical race theory to activate white racial anxiety. Don’t blame wokeness for the reactions of whiteness.

Ocasio-Cortez objected on Twitter to the way her comments were originally characterized and tweeted that she had “Said nothing abt ‘wokeness’ which is a term almost exclusively used by older people these days btw.”

She followed up with another tweet: “Like the average audience for people seriously using the word ‘woke’ in a 2021 political discussion are James Carville and Fox News pundits so that should tell you all you need to know.”

This exchange does tell us something informative: “Woke” is now almost exclusively used by those who seek to deride it, those who chafe at the activism from which it sprang.

No wonder young people are abandoning the word. Opponents to the idea are seeking to render it toxic. They use it to stand in for change itself, for evolution, for an accurate assessment of history and society that makes them uncomfortable and deflates their hagiographic view of American history.

The opponents of wokeness are fighting over an abandoned word, like an army bombarding a fort that has been vacated: They don’t appear fierce, but foolish.