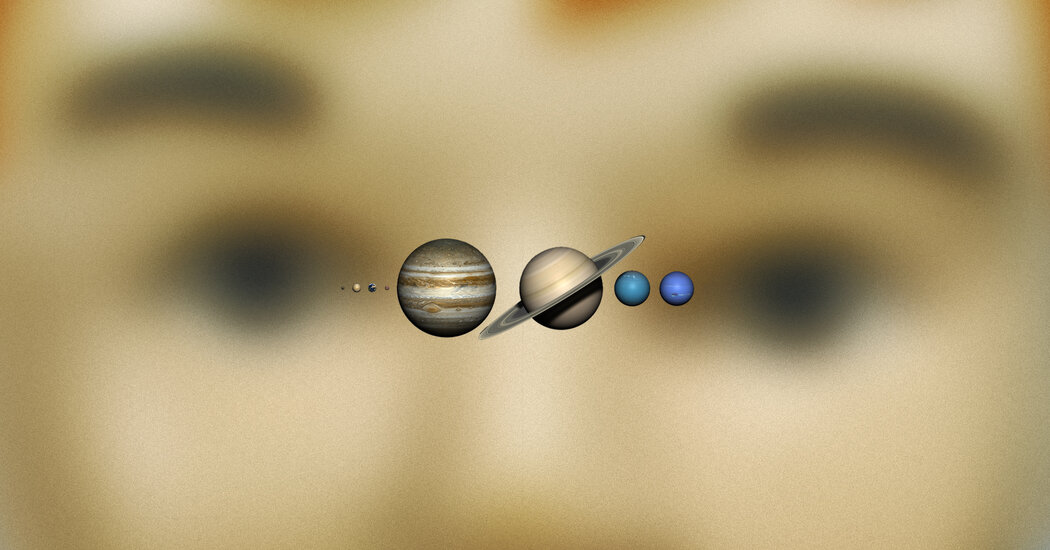 Bigger than a planet? Smaller than an atom? Size comparison videos are all the rage and may scratch a very old itch.

Not long ago, my 7-year-old son looked up from a picture he was drawing.

“Mom,” he said, “If atoms had eyes, would they be able to see subatomic particles?”

His question had been inspired by a specific kind of video that has recently captured his interest and seized it with an iron grip.

Size comparisons videos are animated shorts that use special effects to show the scale of things, typically from smallest to largest. Most are done without narration, just 3-D renderings of objects, scaled in size and then moving as if on an assembly line. They are widespread on YouTube and free to watch, though some have ads. You can find videos that compare planets, animals, bones in the human body, even fictional starships.

On this day, my son had been drawing tiny things on a whiteboard in the living room: an atom, a dust mite, protons. The day before, it was enormous things: galaxies, black holes, supergiant stars.

At first, I assumed these videos were just another in a long line of YouTube sensations that are popular among kids and bewildering to parents. Think disembodied hands opening gift boxes or Thomas trains crashing repeatedly on a loop. Similarly, size comparisons are simple and hypnotic, a rush of dopamine to a 7-year-old brain. In our house, they were all my son wanted to watch, unseating Pokémon and the entire Marvel franchise.

He’s not alone. One size comparison video, titled “Universe Size Comparison 3D,” has been viewed more than 77 million times. Alvaro Gracia, an animator from Spain, has made nearly 100 size comparison videos, and they’re frequently used by teachers who build them into lesson plans. Matthew Lawrence, who creates size comparisons targeted to kids on his channel, Kids Learning Tube, said his views have jumped 40 percent during the pandemic.

So how should parents understand these? What explains the appeal? Do they have educational value or is this just mindless screen time?

The ability to order things by size or quantity has a name in cognitive development: seriation. In the 1940s, the developmental psychologist Jean Piaget noticed that, while adults can almost mindlessly sort a series of jumbled sticks by size, children under 5 often fail at this task. And it’s not until roughly age 7 that they can do it with ease.

Maggie McGonigle, a retired senior lecturer at the University of Edinburgh and author of the textbook “Understanding Cognitive Development,” replicated Piaget’s observations in a series of experiments that tested the ability of children to sort five or more squares or rods on a touch-screen. She also found that while 5-year-olds initially struggle, they can be trained to sort objects successfully.

Her colleague, Iain Kusel, developed a computer model that simulated their learning process during this sorting exercise. They concluded that the 5-year-olds go through a process of ranking by trial and error, during which they eventually begin to look for the smallest difference between objects. An increased working memory capacity, which develops from ages 5 to 7, allows the 7-year-olds to use this smallest difference information to help them solve the problem spontaneously.

Dr. Kusel said he’s not surprised that kids would latch onto this kind of video at the time this developmental growth is occurring.

“I have a hunch that the videos are tapping into something,” he said. “It’s a way of allowing them to express a new engine, a new muscle,” he said.

Humans are exceptional at seeing patterns, and they enjoy analogies, even at a young age, said Dedre Gentner, professor of psychology at Northwestern University. In fact, she believes it’s key to our success as a species. Patterns also have great value in a child’s intellectual development and are critical to science and math.

Both size comparison videos and sorting tasks feature more than just the objects, she said, but also how the objects relate to one another.

“That’s part of what I think is the thrill for kids,” Dr. Gentner said. “You get this constant shift off the object and into a relational pattern. It’s making sense of the world in a way that’s extremely satisfying.”

The concept of scale is mind-boggling.

It’s not just the relationship between objects in these videos: They also show scale. Consider the solar system. Nearly every picture of the sun and planets that a kid sees, whether in a textbook, a storybook or a puzzle, is grossly distorted. Planets often appear close together and similar in size. Because of this, kids (and adults) of all ages develop inappropriate ideas of scale. And it takes creativity to untangle these misconceptions.

One reason children develop misconceptions about size, scale and distance, said Matthew Schneps, a former senior scientist at the Harvard-Smithsonian Center for Astrophysics, “is they are trying to make sense of things they do not have the experience to understand. Puzzled, they try to build an understanding from whatever experience they do have, whether or not the experience applies.”

Dr. Schneps has devoted much of his career to helping students understand science more comprehensively. And he studied video as a learning tool. He was the lead author in a study that found that even brief exposure to virtual 3-D simulations of the solar system advanced students’ understanding of spatial scale and helped clear up deep-seated misconceptions. His paper points out that inconceivably large and small comparisons of scale are common in science, such as geologic time, the size and age of the universe, biological evolution, and the size and speed of atomic and subatomic particles.

Some of these scales are so big or so small that they boggle the brain. To give a sense of sheer size, for example, a group of friends in 2015 built a scale solar system across seven miles of a dry lake bed in Nevada’s Black Rock Desert. Neptune, at the system’s outer limit, was placed more than three miles away from Earth, which was the size of a marble. Neptune was the size of a tennis ball.

Like the simulations in Dr. Schneps’ study, size comparison videos may be an example of screens succeeding where schoolbooks fail. Many of these videos are made by animators, not necessarily scientists or educators, and they are generally not independently checked for accuracy. Still, Dr. Schneps said, he likes size comparison videos because they provide “enough enriching information, expressed via the detail in the images, to allow learners at every level to take away something useful.”

How to teach kids about scale.

There are screen-free ways to teach kids about scale that require a little creativity — and a lot of space. David Jackson, associate professor of science education at the University of Georgia, suggests one such activity for use by middle school science teachers. Placing major events in geologic history along a 131-foot hallway, he demonstrates a geologic time scale of the history of the solid Earth, dating back 4 billion years. The earliest bacteria appear 16 feet from the wall, and the first evidence of multicellular life shows up 96 feet later, nearly seven-eighths of the way down the hall.

Students are always surprised to see how recently modern humans emerged, he said: a mere one-eighth of an inch from present-day. That’s a peppercorn’s length from the finish line.

Using everyday objects to represent scale is memorable for all kids, Dr. Jackson said. For example, if Earth was the size of a standard globe, the moon would be a softball and Jupiter would fill the average bedroom.

If children really enjoy this kind of thinking, encourage it, Dr. Schneps said. Give them the tools to explore it — even if that’s a YouTube video.

“Children are brilliant thinkers, they’re formulating lots of ideas. And we have to engage that active thinking process if they’re going to learn,” he said.

Which brings me back to my son’s question: Could atoms with eyes see subatomic particles? I had no idea, and my husband was stumped, too.

Fortunately, a science-minded friend came up with a calculation. He compared the size of an average 7-year-old to the tiniest thing that child could see — that’s about a 10th of a millimeter, or about the size of a grain of pollen. He then applied that same resolution to a nitrogen atom. And he concluded that no, even the biggest protons and neutrons, which are fantastically tiny, would be too small for that atom to see.

I told my son, who thought about it for a second, nodded and then said: “Now ask him what boogers are for.”

Jenny Marder is a senior science writer for NASA and a freelance journalist. She was formerly digital managing editor for the PBS NewsHour.