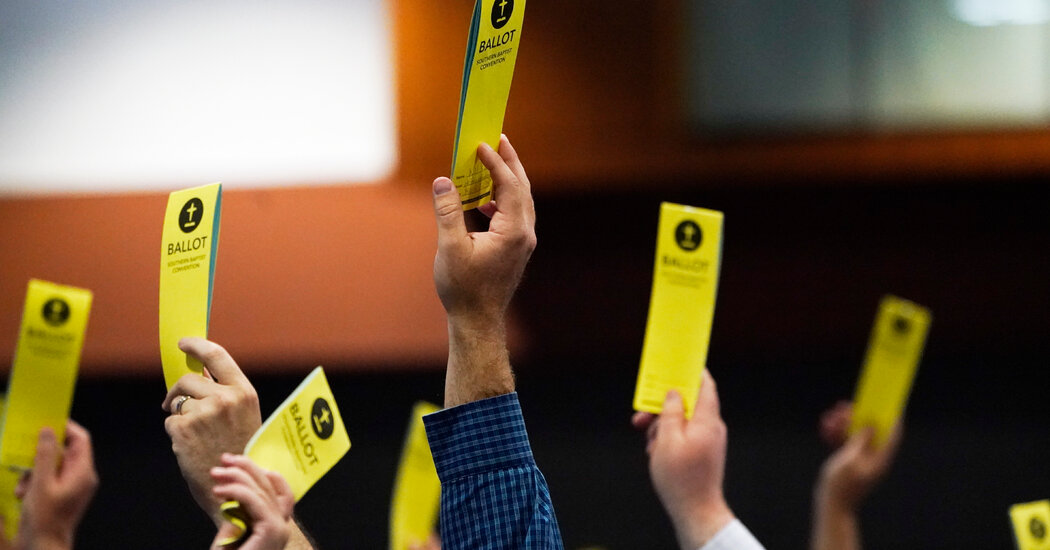 The scandals, jagged-edged judgmentalism and culture war mentality that have enveloped significant parts of American Christendom over the last several years, including the nation’s largest Protestant denomination, the Southern Baptist Convention, have conditioned many of us to expect the worst. Which is why the annual meeting of the convention this week was such a pleasant surprise.

The convention’s newly elected president, the Rev. Ed Litton, barely defeated the Rev. Mike Stone, the choice of the denomination’s insurgent right. Mr. Litton, a soft-spoken pastor in Alabama who is very conservative theologically, has made racial reconciliation a hallmark of his ministry and has said that he will make institutional accountability and care for survivors of sexual abuse priorities during his two-year term.

“My goal is to build bridges and not walls,” Mr. Litton said at a news conference after his victory, pointedly setting himself apart from his main challenger. But those bridges won’t be easy to build.

Tensions in the convention are as high as they’ve been in decades; it is a deeply fractured denomination marked by fierce infighting. The Conservative Baptist Network, which Mr. Stone is part of, was formed in 2020 to stop what it considers the convention’s drift toward liberalism on matters of culture and theology.

Ruth Graham and Elizabeth Dias of The Times describe the individuals in the Conservative Baptist Network as “part of an ultraconservative populist uprising of pastors” who want to “take the ship.” They are zealous, inflamed, uncompromising and eager for a fight. They nearly succeeded this time. And they’re not going away anytime soon.

They view as a temporary setback the defeat of Mr. Stone, who came within an eyelash of winning even after allegations by the Rev. Russell Moore, the former head of the Southern Baptist Convention’s public policy arm, that Mr. Stone blocked investigations of sexual abuse at Southern Baptist churches and engaged in a broader campaign of intimidation. (Mr. Stone has denied the charges.)

True to this moment, the issues dividing the convention are more political than theological. What preoccupies the denomination’s right wing right now is critical race theory, whose intellectual origins go back several decades, and which contends that racism is not simply a product of individual bigotry but embedded throughout American society. As The Times put it, “the concept argues that historical patterns of racism are ingrained in law and other modern institutions, and that the legacies of slavery, segregation and Jim Crow still create an uneven playing field for Black people and other people of color.”

What upset many members of the Conservative Baptist Network was a nonbinding 2019 resolution approved at the convention’s annual meeting stating that critical race theory and intersectionality could be employed as “analytical tools” — all the while acknowledging that their insights could be subject to misuse and only on the condition that they be “subordinate to Scripture” and don’t serve as “transcendent ideological frameworks.”

Late last year, the Rev. J.D. Greear, who preceded Mr. Litton as president, tweeted that while critical race theory as an ideological framework is incompatible with the Bible, “some in our ranks inappropriately use the label of ‘CRT!’ to avoid legitimate questions or as a cudgel to dismiss any discussion of discrimination. Many cannot even define what C.R.T. is. If we in the S.B.C. had shown as much sorrow for the painful legacy that sin has left as we show passion to decry C.R.T., we probably wouldn’t be in this mess.” (The Southern Baptist Convention was created as a result of a split with northern Baptists over slavery. In 1995, the convention voted to “repent of racism of which we have been guilty.”)

In his farewell address as president last week, Mr. Greear warned against “an S.B.C. that spends more energy decrying things like C.R.T. than they have of the devastating consequences of racial discrimination.” And another former president of the convention, the Rev. James Merritt, said, “I want to say this bluntly and plainly: if some people were as passionate about the Gospel as they were critical race theory, we’d win this world for Christ tomorrow.”

Even if you believe, as I do, that some interpretations of critical race theory have problematic, illiberal elements to them, it is hardly in danger of taking hold in the 47,000-plus congregations in the convention, which is more theologically and politically conservative than most denominations. What is ripping through many Southern Baptist churches these days — and it’s not confined to Southern Baptist churches — is a topic that went unmentioned at the annual convention last week: QAnon conspiracy theories.

Dr. Moore, who was an influential figure in the Southern Baptist Convention until he split with the denomination just a few weeks ago, told Axios, “I’m talking literally every day to pastors, of virtually every denomination, who are exhausted by these theories blowing through their churches or communities.” He said that for many, QAnon is “taking on all the characteristics of a cult.”

Bill Haslam, the former two-term Republican governor of Tennessee, a Presbyterian and the author of “Faithful Presence: The Promise and the Peril of Faith in the Public Square,” put it this way in a recent interview with The Atlantic:

I have heard enough pastors who are saying they cannot believe the growth of the QAnon theory in their churches. Their churches had become battlegrounds over things that they never thought they would be. It’s not so much the pastors preaching that from pulpits — although I’m certain there’s some of that — but more people in the congregation who have become convinced that theories are reflective of their Christian faith.

According to a recent poll by the conservative American Enterprise Institute, nearly a third of white evangelical Christian Republicans — 31 percent — believe in the accuracy of the QAnon claim that “Donald Trump has been secretly fighting a group of child sex traffickers that include prominent Democrats and Hollywood elites.” White evangelicals are far more likely to embrace conspiracy theories than nonwhite evangelicals. Yet there have been no statements or resolutions by the Southern Baptist Convention calling QAnon “incompatible with the Baptist Faith & Message,” which six S.B.C. seminary presidents said about critical race theory and “any version of critical theory” late last year. Too many Southern Baptist leaders, facing all sorts of internal problems and dangers, would rather divert attention and judgment to the world outside their walls. This is not quite what Jesus had in mind.

The drama playing out within the convention is representative of the wider struggle within American Christianity. None of us can fully escape the downsides and the dark sides of our communities and our culture. The question is whether those who profess to be followers of Jesus show more of a capacity than they have recently to rise above them, to be self-critical instead of simply critical of others, to shine light into our own dark corners, even to add touches of grace and empathy in harsh and angry times.

That happens now and then, here and there, and when it does, it can be an incandescent witness. But the painful truth is it doesn’t happen nearly enough, and in fact the Christian faith has far too often become a weapon in the arsenal of those who worship at the altar of politics.

Rather than standing up for the victims of sexual abuse, their reflex has been to defend the institutions that cover up the abuse. Countless people who profess to be Christians are having their moral sensibilities shaped more by Tucker Carlson’s nightly monologues than by Jesus’ Sermon on the Mount.

Perhaps without quite knowing it, many of those who most loudly proclaim the “pre-eminence of Christ” have turned him into a means to an end, a cruel, ugly and unforgiving end. And this, too, is not quite what Jesus had in mind.

Peter Wehner (@Peter_Wehner), a senior fellow at the Ethics and Public Policy Center who served in the Reagan, George H.W. Bush and George W. Bush administrations, is a contributing Opinion writer and the author of “The Death of Politics: How to Heal Our Frayed Republic After Trump.”