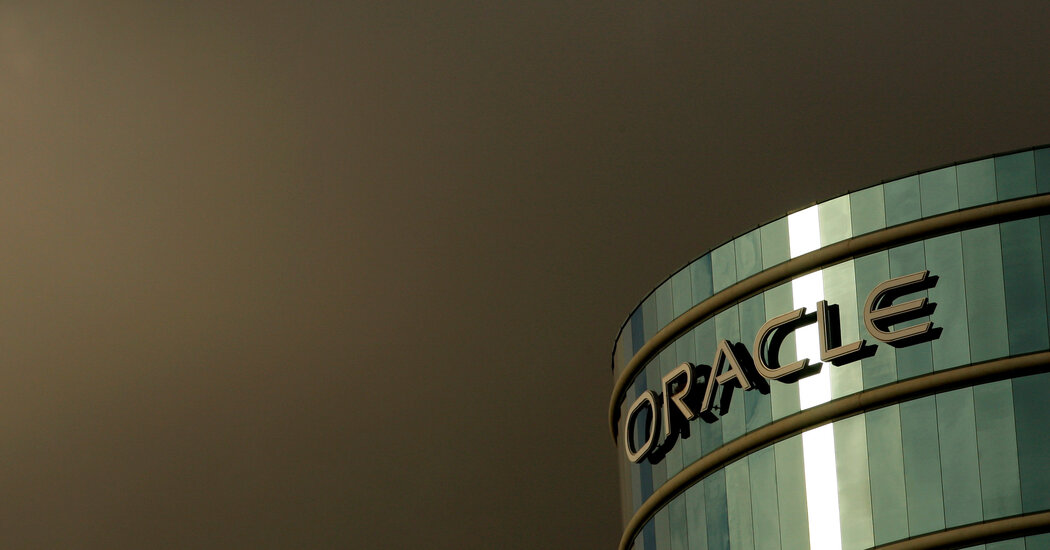 Sometimes, when I am feeling particularly ornery, I think that Oracle is like the Kid Rock of tech: Among the least compelling of digital celebrities in Silicon Valley, this 43-year-old business software giant always seems willing to show up at the White House and enthusiastically do whatever the Trump administration wants.

Join transition committees and business round tables, even as other tech executives hold their noses or flee in horror over President Trump’s immigration bans? Sure! Fund-raising for the president’s re-election at the swanky California digs of its puckish founder Larry Ellison? But of course! Set up a database for tracking Covid-19 treatments, even if the controversial and potentially dangerous hydroxychloroquine information pushed by Mr. Trump is to be loaded up on it? Sign us up!

You can chalk up Oracle’s bear hug of the Trump administration — and vice versa — as business as usual, and maybe it is. Or you might be inclined to pillory Oracle for cravenly sucking up to an administration with more than its fair share of grifters.

But what we can all agree on is that Oracle’s efforts will appear to have paid off if the company finally gets to grab a seat at the cool kid’s table by managing to become an owner of tech’s hottest start-up, TikTok.

That’s still a big if. The deal was supposed to be an outright acquisition by an American company, as ordered by Mr. Trump this summer, as he fretted about the security risks of a Chinese company owning a digital platform — and all the personal data that comes with it — that is wildly popular with young Americans.

Microsoft showed interest in buying the company. That fell through, and last weekend Oracle emerged as TikTok’s U.S. partner.

The deal will have to be approved by Mr. Trump — who had some nice words to say about Mr. Ellison on Tuesday. And it must be reviewed by national security experts and the powerful interagency Committee on Foreign Investment in the United States, which weighs national security risks of making deals with foreign entities.

From what we know so far, and things may change, ByteDance would apparently remain the actual owner of the magical recommendation algorithm used by TikTok, whose misfortune amid all of its popularity is to be owned by a company based in China at a political moment when being a Chinese company with 100 million American users is not ideal.

That’s what set the battle over TikTok in motion, which culminated in an executive order by Mr. Trump that it must be sold or be banned in the United States this week, before China presumably downloaded all the data from our dance-crazy teenagers (Mr. Trump, of course, has offered no proof that Beijing is sucking up user data).

It’s a much more complex story than that, of course, part of a worldwide battle with China for hegemony over the next tech age. And there are indeed legitimate concerns about giving a Chinese company access to data, as well as about potential back doors and also the more subtle power that Beijing could acquire to deliver propaganda to Americans through an entertainment app.

There is no question that the issues of Chinese influence and surveillance should be top of mind for any democratic government — and a cogent and broad-ranging policy of how to deal with Beijing is necessary.

But this is not that. What we have been left with after all the gnashing of teeth and tearing out of orange hair is a lot of sound and fury that appears to signify very little.

The terms of an Oracle deal remain unclear. There is some talk of a kind of separately carved out TikTok for the United States, with an American board and majority American investors, but what is still troublingly opaque is who exactly would own and control the critical code for TikTok.

Several tech leaders told me that this half-baked solution came about because, as usual, our hair-trigger president was over his skis in making his TikTok declarations this summer. It eventually began to sink in with the Trump administration that forcing an American acquisition and the unspooling of a complex global company are not as easy as yelling about the “China menace.”

For one, many of the investors in ByteDance are very powerful venture capitalists based in the United States, none of whom wanted to be forced to sell their stake through a discounted fire sale orchestrated by Mr. Trump (and several are major Republican supporters).

The early front-runner in the deal, Microsoft, found itself outmatched by Oracle, which was a big surprise for many analysts. Along with Amazon and Google, Microsoft is a top player in the cloud-services business, with Oracle well behind in both business size and talent. While Oracle recently scored a win as the cloud-service provider for the pandemically popular Zoom, Microsoft was seen as the obvious choice to take over TikTok by those who understand the technological challenge it will be to strip it of Chinese influence.

Microsoft seemed to take Mr. Trump at his word that he wanted a sale, and numerous sources said its offer was a full takeover of TikTok’s U.S. business. “Microsoft wanted complete control,” said one insider.

That had become problematic after China decided to potentially block the transfer of TikTok’s recommendation algorithm outside the country. It was a boss move, roughly akin to letting someone sell a car, but without its engine.

Is this just a matter of Oracle overseeing American operations and getting some stock? Or would it be a worldwide deployment for Oracle with huge control of the service? Or would Oracle be just a dressed-up provider of cloud services, an overpaid babysitter of data, a rent-a-cop serving the mall of memes?

Mr. Mnuchin also sounded some loud politically motivated bells and whistles — like promises of American jobs and a new U.S. headquarters. But those things were already happening before this hubbub started. There had been talk of a possible spinoff and U.S. public offering by TikTok, which might have resulted in the same outcome had Mr. Trump not intervened (there might still be an I.P.O. in the future).

One other key question that many people in the tech industry are asking: Is this a very convoluted way of rewarding a corporate ally of the Trump administration?

And some Washington politicians who have been supporters of dinging Chinese aggression also have their own questions about the Oracle deal.

“Any corporate shell game that leaves TikTok in the hands of ByteDance will simply perpetuate the original problem, leaving U.S. national interests and everyday users at serious risk,” Senator Josh Hawley, Republican of Missouri, wrote in a letter to Mr. Mnuchin, calling for a rejection of the deal.

This is a sign that Oracle will likely be subject to more speculation that this is only a face-saving half-measure and that it would not get such sweet deals without the favor of the White House.

So, until there is more clarity about how this will all be carried out by the government, Oracle’s role when it comes to TikTok will be as inexplicable as the lyrics of Kid Rock’s biggest hit: “Bawitdaba da bang da bang diggy diggy diggy.”

You figure it out.