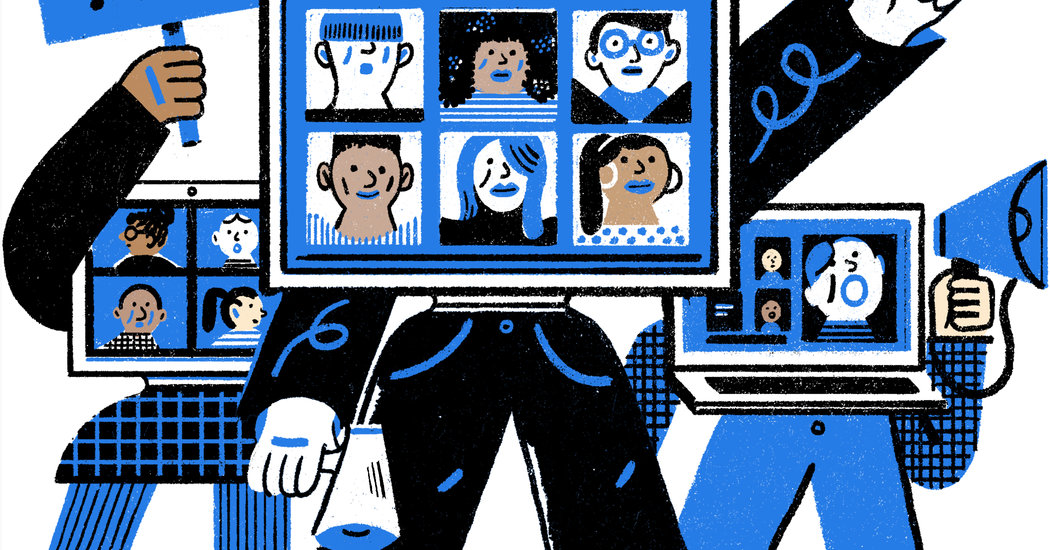 The activists popped into frame a few at a time, the shadowy rectangles of the videoconferencing app Zoom opening grainy windows into their kitchens, bedrooms and livelihoods. A chat icon at the bottom of the screen glowed orange as they said hello.

Held on a recent Tuesday evening, the Zoom call resembled the teleconferences many Americans have grown accustomed to during the pandemic. But at the second online monthly meeting of a New York hub of the Sunrise Movement, a phalanx of young climate activists, something more consequential was on the agenda.

“This is a really scary and kind of catastrophic moment for many people, in this country and within our hub,” said Berenice Tompkins, who hosted the call. “Part of the intention of this meeting is for all of us to be here for each other and talk about some of the ways we can support each other. And in addition to that, we’re going to be talking about power-building.”

Ms. Tompkins is part of a vanguard of grass-roots activists who have boiled onto the streets, organized locally and put pressure on elected officials in the Trump era, reviving a tradition of widespread civic participation that lay dormant on the political left for decades.

This “resistance” of volunteer organizers, many of them new to activism, is ideologically and geographically diverse, spanning progressives, moderate liberals and even some anti-Trump conservatives. And while the resistance includes youth-led groups like Sunrise, many of its most committed and longest-active organizers are middle-aged or older. Many, also, are women.

Spurred by the shock of Donald Trump’s election, thousands of these citizens formed local groups around the country dedicated to resisting his agenda. Drawing on grass-roots tactics used by the Tea Party, they rallied in defense of the Affordable Care Act, flooded congressional phone lines and picketed Republican lawmakers. They also registered voters and canvassed for Democratic candidates, helping the party to retake the House of Representatives in the 2018 midterm elections. Much of this standing activist army has remained engaged since, eager to tap those same tactics to defeat Mr. Trump this November.

But now the coronavirus crisis is threatening the civic resurgence the Trump presidency inspired, transforming marches, town halls and door-knocking from the building blocks of liberal organizing into potential vectors for disease. So until social distancing lifts, Zoom meetings like Sunrise NYC’s have emerged as the idling engines of pent-up activist energy.

“It’s a huge setback in terms of actually playing to what were our strengths, which is going out in person and having rallies and protests and these big, growing, in-person meetings,” said Ted Bogin, another Sunrise NYC organizer who helped facilitate the call. “It’s forced us to adopt a fully digital strategy.”

Activists nationwide have pivoted to online meetings, Slack trainings and a renewed focus on social media. “We were planning on knocking on doors and talking with people about the census, checking on their voter registration and giving them a calendar of election dates,” said Martha Shockey, 65, who founded an Indivisible group in the Atlanta suburbs. “It took a couple of weeks for us to figure out how we would do any of that work in this environment.”

Twitter, Facebook and other platforms can help sustain vital links between organizers and their communities, said Theda Skocpol, a Harvard political scientist and co-editor of “Upending American Politics: Polarizing Parties, Ideological Elites, and Citizen Activists From the Tea Party to the Anti-Trump Resistance.”

“Crises like this cause people to double down on the relationship they already have. So if there are strong ties going into a crisis, they can be adapted,” she said.

But some fear that too much online activism risks depersonalizing — or defanging — their work. “Organizing is an in-person activity,” said Liat Olenick, an elementary school science teacher who co-founded a Brooklyn-based Indivisible group that’s moved its canvassing and planned Earth Day protests online. “It’s much more challenging to put people through those activities when they’re at home alone.”

Ms. Tompkins first got involved with Sunrise at a demonstration the group organized outside Senator Chuck Schumer’s apartment. For now, though, there can be no in-person events. That may not discourage longtime organizers, but it could the uninitiated. At its height, the Sunrise Zoom call had 36 participants, a few of them new recruits. But in-the-flesh monthly meetings usually drew twice that, Mr. Bogin said.

Activists are also confronting the sense of isolation social distancing can breed. For those stressing over vulnerable loved ones, lost jobs or cabin fever, remote organizing has become therapeutic as well as strategic. This month, Sunrise NYC held a community care workshop over Zoom aimed at easing anxiety. “We’re all learning to be patient with ourselves and each other,” said Ms. Shockey, the Georgia Indivisible group founder. “Our motto is to organize with a generous spirit, and this is a time for that, for sure.”

And while normal life still seems far off, activists remain hopeful that the virus-induced holding pattern will break before November. “I kind of think of social distancing as a pressure cooker, where all of the organizing that we continue to do during this time helps to build up that pressure,” Ms. Tompkins said over Zoom.

Six and a half months from the general election, that determination remains aspirational, as does the power of the resistance to shape a campaign shadowed by the coronavirus. Sunrise NYC is planning digital town halls and phone banking to aid progressive challengers to establishment Democrats in New York’s primary election, which has been delayed until June, but the crisis could further reduce already-low turnout rates among younger voters.

Meanwhile, Joe Biden’s emergence as the presumptive Democratic nominee for president is a reminder that most of the party’s midterm gains were made by relative moderates in swing districts, often with resistance activists’ help. But for now, members of Ms. Shockey’s center-left group — who helped one of those Democrats, Lucy McBath, flip a Republican-held House seat in 2018 — are focused more on helping Georgians navigate remote voting than on boosting candidates. Some have started sewing masks for local health care workers.

And even as the coronavirus has given many resistance organizers a renewed sense of purpose, restrictions to combat it have spurred some people on the right — organized by conservative groups and egged on by Mr. Trump and Fox News — to flout social-distancing rules and protest by the hundreds in Michigan, Wisconsin and other states.

For Ms. Tompkins, whose mother has been sick with the symptoms of Covid-19, the disease caused by the coronavirus, the crisis has intensified impulses that undergird her activism.

“This has really driven home the fact that our country doesn’t have an adequate social safety net or an adequate means to take care of people in normal circumstances,” she said. “Or when a crisis like this hits.”