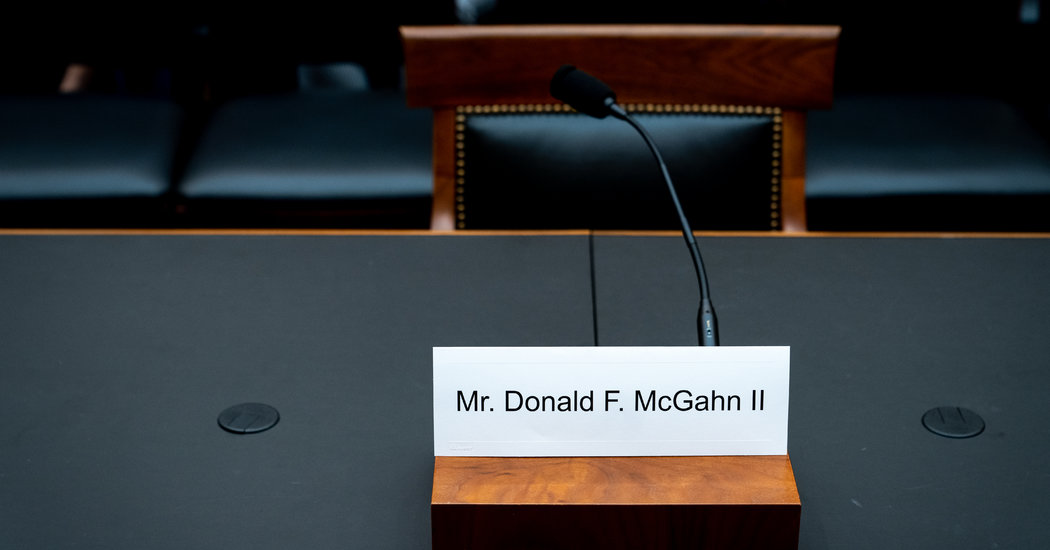 Can a member of the executive branch simply defy a congressional subpoena for testimony? That question was before the U.S. Court of Appeals for the District of Columbia Circuit.

On Friday, the three-judge panel came to a confounding — and for many people, deeply troubling — decision: The court had no jurisdiction to consider the question. The case concerned the former White House counsel Don McGahn and the House Judiciary Committee. Mr. McGahn had been subpoenaed by the House on April 22, 2019, to testify about his role in potential obstruction of justice by the president in connection with the Mueller investigation.

In November, a lower court ruled in favor of the House committee: It said that there was no such thing as “absolute testimonial immunity” — the Justice Department’s argument — and that Mr. McGahn must appear.

But the appellate court decided that courts have no jurisdiction to settle the case. Mr. McGahn is free to continue to ignore the House’s subpoena.

The president and his allies are rejoicing. It is truly a remarkable victory for a president whose counsel, just earlier this month, argued to senators in his impeachment trial that the question of enforcement of congressional subpoenas should be handled by the courts. The defenders of robust presidential power at the Justice Department are likewise over the moon — they have wanted a court to adopt this position since long before the Trump administration came to power.

But make no mistake: It is a devastating blow to the House of Representatives’ ability to conduct investigations of and compel information from the executive branch. Because the court based its decision on jurisdictional grounds rooted in separation-of-powers concerns, if it is allowed to stand, it seems no House subpoena issued to a current or former executive branch official could be enforced through the courts.

Remember the Operation Fast and Furious case, when House Republicans subpoenaed documents and testimony from the Obama administration about a federal gunrunning operation gone wrong? If this opinion had been the law of the land then, the subpoena could have been ignored by the president and the court case dismissed.

In a vacuum, the opinion isn’t illogical. When a House committee issues a subpoena to the executive branch and the president does not comply, courts cannot get involved to solve the dispute: That would mean the court is unconstitutionally putting itself above the other two branches of government. Congress must instead rely on its own constitutional powers to obtain compliance with the subpoena from the president.

The problem isn’t with the Constitution. The problem is that, as a practical matter in the current political environment, the House of Representatives does not have other effective tools it can use to enforce its subpoenas. It has no power over the president’s nominees (that’s the Senate’s job, and besides, this president prefers acting officials anyway). The House cannot block the president’s desired legislative agenda because at the moment there isn’t one. And for President Trump’s one prized project — the wall — he already executed an end-run around the annual congressional appropriations process by declaring a national emergency at the southern border.

In theory, the House could try to deny funding for the executive branch more broadly, or parts of it. But you can imagine Mr. Trump welcoming such a move because it would offer an opportunity to paint House Democrats as extremists bent on bringing him down. The House could try to embarrass noncompliant officials by censuring them or holding them in contempt. But such measures would rightfully be viewed as toothless. Indeed, in a political culture that rewards conflict and punishes compromise, you can imagine the president encouraging his supporters to view a contempt citation from the House of Representatives as a badge of honor — and proof of victimhood.

In theory, the House could seek to enlist the Senate in supporting its oversight efforts. But a Senate whose leadership and majority is politically dependent on the president’s approval — like Mitch McConnell and Republicans in the Senate — won’t act to protect institutional prerogatives.

The House could try to rely on its inherent contempt power to send the sergeant-at-arms of the House, Paul D. Irving, to physically take Mr. McGahn into custody and detain him somewhere — in, say, the Capitol Police headquarters. If Mr. McGahn did not wish to be detained, he could visit his old boss — and let the Capitol Police and the Secret Service fight it out on the grounds of the White House.

If the sergeant-at-arms did manage to detain Mr. McGahn, the courts would almost certainly find they have jurisdiction to consider a petition for a writ of habeas corpus. That’s a court order demanding that a public official (such as the sergeant-at-arms) deliver a detained individual to the court and show a valid reason for that person’s detention. In that context it’s possible the court could decide the merits of the testimonial immunity issue.

Nevertheless, it’s hard to say exactly how this case ends. Friday’s court decision could be appealed by the committee and the case then receive what’s known as an en banc hearing — where all the judges on the District of Columbia Circuit Court hear and decide the case. That could drag on for months. The case could be rendered moot by the November election, or in theory be decided by the Supreme Court sometime in 2021.

If the case is rendered moot, the opinion would not have any legal effect, strictly speaking. But that doesn’t necessarily mean this decision goes away. Unless it is overturned, it will remain on the books and be used as a cudgel by any president that wishes to defy congressional subpoenas. And that could alter the balance of power for a generation or more in favor of secrecy, a lack of accountability and even lawlessness within the executive branch.

In the opinion, the judges imply that Mr. McGahn’s failure to show may very well be an illegal obstruction of Congress’s work. But if their decision is allowed to stand, we will almost certainly never know: It’s the Justice Department that makes decisions about whether to bring suits against individuals for criminal contempt violations. In theory, the next president could bring criminal contempt charges against those refusing to testify.

That sounds pretty ugly, too.

Margaret L. Taylor (@MargLTaylor) is a senior editor at Lawfare and a fellow at the Brookings Institution.