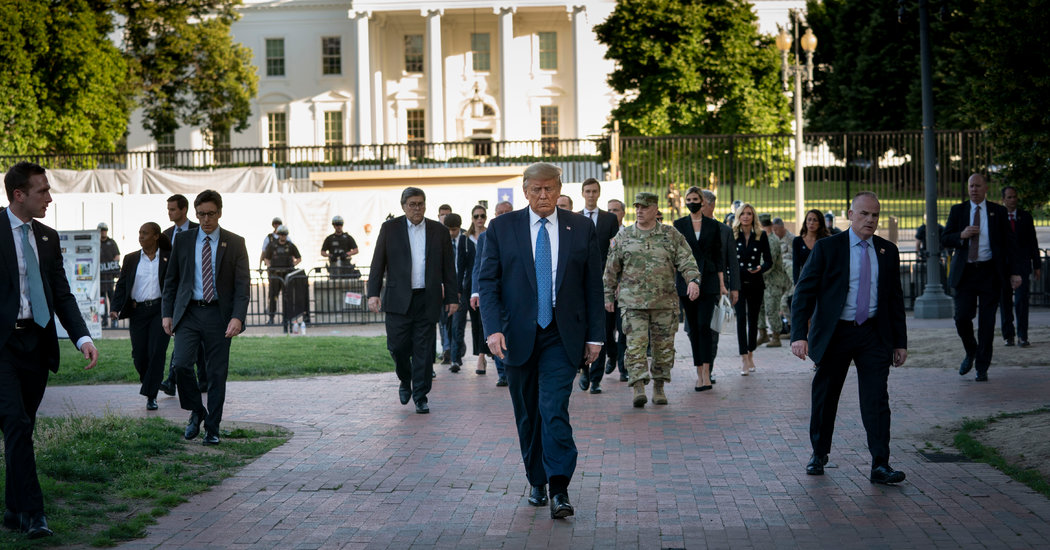 You never want to say that you’ve reached a tipping point with this administration. Donald J. Trump has proved to be the Nosferatu of American politics: heartless, partial to Slavs, beneath grace and thus far impervious to destruction.

Even when I read my colleague Jonathan Martin’s fine piece on Saturday, about how some high-profile Republicans refuse to vote for Trump or are struggling with publicly lending him their support, I thought: yes, but. They’re just a handful. They’re the usual suspects. Too few of them have coattails.

Yet something right now really is different. I think.

Before diving into the more entrancing developments, I’ll start with the obvious: Trump’s old tactics, once so reliable, are starting to fail him, utterly.

It was a winning strategy to crow about a border wall with Mexico, but it’s a loser — and a sign of pure cowardice — to build one around your own White House. He once basked in the reflected glow of “his generals”; now those generals are laying waste to him, with James Mattis, his former defense secretary, explicitly condemning Trump’s immature and divisive leadership, and John Kelly, the president’s former chief of staff, saying yep, sounds about right.

Maybe there was a time when religious conservatives would have applauded a photo of Trump standing in front of St. John’s Episcopal Church, Bible in hand. But using pepper balls and flash-bang grenades to clear anguished protesters out of the way backfired. The Episcopal bishop of Washington reacted in horror; Trump’s support among white Catholics slipped 11 points between April and May.

Maybe there was a time when stigmatizing all progressive protesters as invading marauders would have worked — bigotry, it gets the job done — but not now. His proposal to suppress the tumult with the military was greeted with disapproval by his current secretary of defense, Mark Esper, and disgust by Mattis; the Black Lives Matter movement now polls at an all-time high, with 66 percent of Americans disapproving of how Trump has handled the response to George Floyd’s death.

Trump is flailing like an overturned turtle. A historic health crisis, an economic crisis and a social crisis all at once — it’s far too much for a reality TV star to handle, no more manageable than it’d be for him to land an airplane. What this moment may have revealed, ironically enough, is that only in a time of stability and outrageous decadence could the United States have had the luxury of picking such a dark and divisive candidate with the intellectual firepower of a water gun. When Trump asked voters “What have you got to lose?” most never dreamed that the answer could be: Everything.

But now for the subterranean tremors that most beguile me — a suggestion that something deeper is afoot.

Trump, right now, is trying to stoke white fears about protests in the street. But he’s having little luck. On Wednesday, Lara Putnam, the chairman of the history department at the University of Pittsburgh, tweeted a modest but persuasive thread highlighting the easy victory by Summer Lee, a progressive African-American woman elected to the Pennsylvania statehouse in 2018, in the Democratic primary on Tuesday.

“Based on the history of the district — and the range of voters I’ve talked to there myself — it seemed entirely plausible that there would be white backlash against her in this moment,” Putnam told me.

If ever there were a moment for a backlash, she pointed out, this would have been it: Images of social unrest were all over Pittsburgh television the weekend before the primary, and Lee had been an outspoken proponent of the protesters. Voters could have selected her primary opponent, a moderate white borough councilman who had the backing of the county’s most powerful Democrat — and its Democratic Party.

Instead, voters doubled down. Lee was already winning on Election Day — we now know this, based on mail-in ballots — and as the ballot counting continued, she pulled even further ahead. Her victory suggested that the white suburban women and retirees in her district were unswayed by Trump’s demonizing and dog-whistling.

In these protests, it is possible we are seeing the rumblings of a new Democratic coalition. On Saturday, Putnam and two of her colleagues wrote that the scale and geographic diversity of these demonstrations were without American precedent.

We already know that Trump’s support among white women is sliding in the polls, both with college degrees and without; it’s probably not an accident that the first Senate Republican to endorse Mattis’ views of Trump was Lisa Murkowski, a white woman from Alaska. (And perhaps, as Jonathan Martin’s piece hinted, other Republican senators will start to follow, and refrain from giving him their support.) As Barack Obama pointed out in his recent town hall, “a far more representative cross-section of America” is out protesting in the streets than in the 1960s.

At a time of genuine crisis, Americans aren’t pining for Darth Vader. They’re pining for a healer. It’s healing words of empathy that have thus far won the day. Trump may have been fumbling with his Bible, but it was Nancy Pelosi who read aloud from Ecclesiastes, and it was Joe Biden who said in a heartfelt, 24-minute speech that he wished the president would open it every once in a while.

It’s probably too much to hope for. But for the first time in three years, change is not.