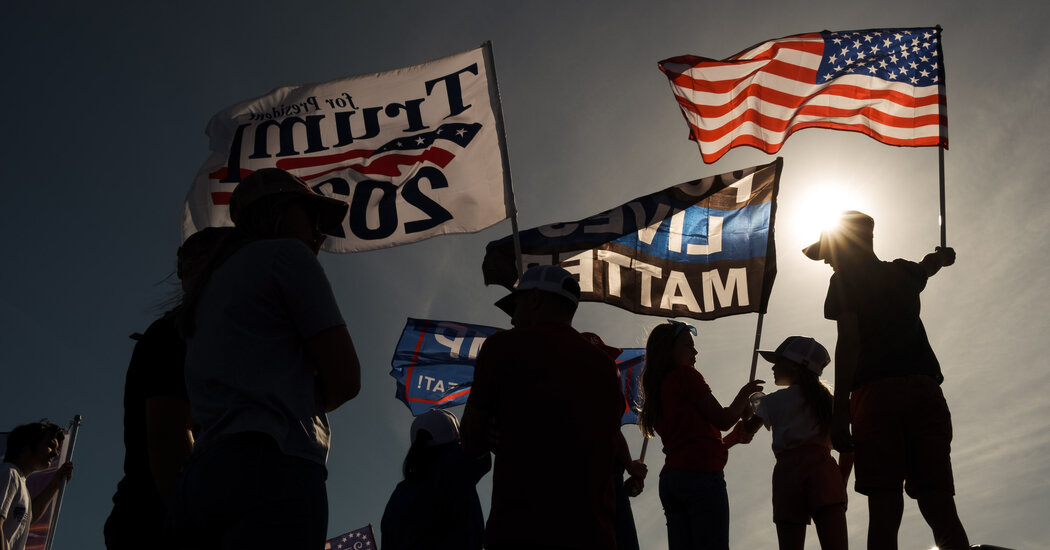 Former Senator David Perdue knows how to crash a party. When he announced that he would seek the 2022 Republican nomination for governor in Georgia, challenging the incumbent, Brian Kemp, he did more than enter a primary race. He illustrated the dangers facing the G.O.P. in the coming year.

Georgia Republicans are divided over former President Donald Trump and torn between mainstream credibility and the conspiratorial fringe. Mr. Perdue — an ally of Mr. Trump — has made these divisions worse. The beneficiary? The Democrat Stacey Abrams.

Republicans worry about internal strife and outlandish messages that turn off swing voters because everything else is going their way. The party did well in last month’s elections. President Biden’s low approval ratings endanger Democrats in Congress, where Republicans must net only five seats in the House and one in the Senate to seize control.

Republican strength at the state level gives the party an advantage in drawing new maps of congressional districts, which will amplify their slim lead in the FiveThirtyEight estimate of the congressional generic ballot.

Yet history shows how expectations can be thwarted. Republicans have experienced hopeful times before — only to have the moment pass. They believed that disapproval of President Bill Clinton’s conduct would expand their majorities in 1998. They ended up losing five House seats. They believed that Mr. Trump would rally the base to support two incumbent senators during runoffs in Georgia last January. They lost both seats and control of the Senate.

Time and again, the biggest obstacle to a red wave hasn’t been the Democratic Party. It’s been the Republican Party.

Republican victories in the midterms next year are far from preordained. Glenn Youngkin’s win in Virginia may be much harder to replicate elsewhere than it looked on election night. Republican leaders continue to fear Mr. Trump and his supporters, and they are divided over candidate selection, message and agenda. The result is a unique combination of external strength and internal rot: an enthusiastic and combative Republican Party that despite its best efforts may soon acquire power it has done nothing to deserve.

It will be hard for the party to appeal to the suburban independents who decide elections, though Mr. Youngkin’s success suggests a path. He is the first Republican elected governor of Virginia in over a decade because of his emphasis on kitchen-table issues like rising prices and school closures. He ignored immigration, encouraged vaccination while opposing government mandates and stayed clear of Mr. Trump during the general election. He focused on parental involvement in education and planted himself firmly in the center-right of the political mainstream. When asked about a Trump rally where the Pledge of Allegiance was recited to a flag supposedly connected to the Jan. 6 riot at the U.S. Capitol, Mr. Youngkin called it “weird and wrong.” One Republican senator joked in private that Mr. Youngkin had figured out how to hold Mr. Trump’s hand — under the table and in the dark.

Other candidates won’t be as skilled or as lucky as Mr. Youngkin. Republicans lost winnable Senate seats in 2010 and 2012 because of flawed nominees like Sharron Angle in Nevada, Christine O’Donnell in Delaware, Todd Akin in Missouri and Richard Mourdock in Indiana. Past may be prologue if Republicans nominate Trump allies whose record or rhetoric are questionable and extreme. Last month, one Trump-endorsed candidate for Senate, Sean Parnell of Pennsylvania, suspended his campaign after he lost a custody battle against his estranged wife. The Trump endorsees Kelly Tshibaka of Alaska and Herschel Walker of Georgia are untested on the campaign trail. In races where Mr. Trump hasn’t yet endorsed, Blake Masters of Arizona, Eric Greitens of Missouri and J.D. Vance of Ohio may secure the MAGA base by forfeiting viability in the general election.

Mr. Trump remains the central figure in the G.O.P. Party elites try to ignore him as he spends many days fighting Republicans rather than Democrats and plotting his revenge against the 10 Republican House members who voted for his second impeachment, the seven Republican senators who voted to convict him and the 13 House Republicans who voted for the bipartisan infrastructure bill. Mr. Trump targets his enemies with primary challenges, calls for “audits” and “decertification” of the 2020 presidential results and howls at Mitch McConnell for not being “tough.” His imitators within the party are a font of endless infighting and controversy, and they undermine the authority of the House Republican leader, Kevin McCarthy. Mr. Trump would have it no other way.

The former president was content to keep a distance in this year’s races for governor. He won’t be so quiet next year — especially if he concludes that a successful midterm is a key step to his restoration to power in 2024. A more visible and vocal Trump has the potential to help Republicans in solid red states but doom them in purple or blue ones. Yet control of the Senate hinges on the results in Nevada, Arizona, Georgia, Wisconsin, Pennsylvania and New Hampshire — states Mr. Trump lost in 2020.

Mr. Youngkin showed that a positive message attuned to middle-class priorities repels Democratic attacks. If Republicans campaign on a unified message that applies conservative principles to inflation, the border, crime, education and health care, they might be able to avoid being tagged as the party of extremism, conspiracy and loyalty to Mr. Trump. Their problem is that they have no such message.

Mr. McConnell has reportedly told Senate Republicans that they won’t release an agenda before the midterms. He’s worried that specific proposals are nothing but fodder for Democratic attacks. What should worry him more are rudderless Republican candidates who allow their Democratic opponents to define them negatively — and then, if they still win, take office in January 2023 with no idea what to do.

In an ideal world, more Republicans would think seriously about how best to provide individuals and families with the resources necessary to flourish in today’s America. They would spend less time attacking one another and more time offering constructive approaches to inflation and dangerous streets. They would experiment with a ranked-choice primary system that played a role in Mr. Youngkin’s nomination in Virginia and in the law-and-order Democrat Eric Adams’s win in New York City’s mayor’s race. Interested Republicans would declare today that Mr. Trump won’t deter them from seeking the presidency — reminding him that renomination is not guaranteed.

But that’s not the world we live in. Republicans appear either unwilling or unable to treat the former president as a figure from the past whose behavior has done the party more harm than good. They take false comfort in the idea that midterm elections are “thermostatic,” the inevitable repudiation, climatic in nature, of the governing party. They assume they will win next year without doing anything of significance. And they may be right.

Matthew Continetti is a senior fellow at the American Enterprise Institute and the author of the forthcoming “The Right: The Hundred Year War for American Conservatism.”