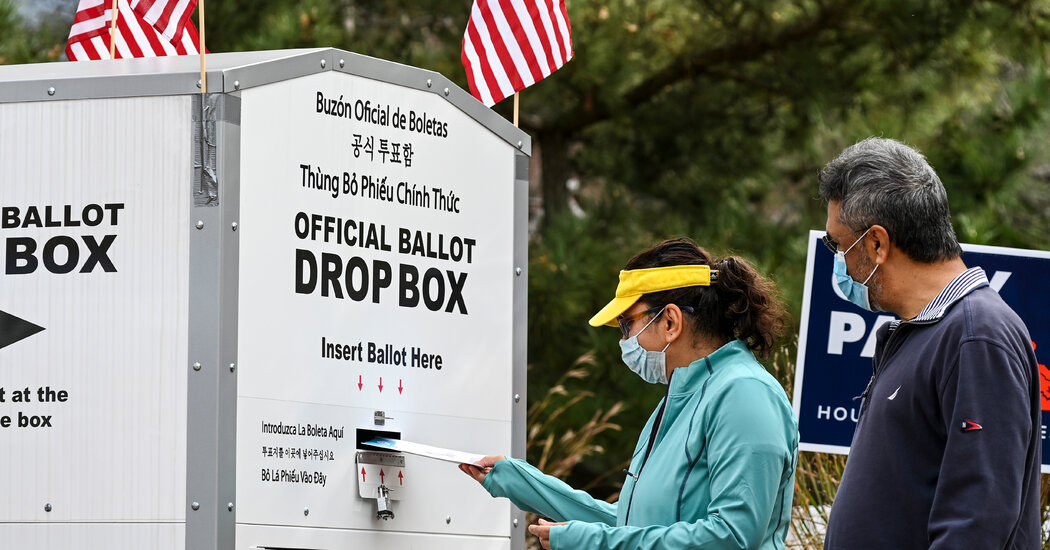 Mail-in ballots skewed early returns in some states in 2020. Will the trend repeat itself on Tuesday?

But for hours after the polls closed in Virginia, partial returns showed Biden trailing, at times by substantial margins — around 18 points, for instance, as of 9 p.m. Eastern time.

Part of that was geography; the rural, conservative counties of southwestern Virginia tend to start reporting election results before the more populous Democratic strongholds of Northern Virginia. But it was also a product of something new: a so-called red mirage. Because so many Democrats voted by mail in response to the pandemic and mail-in ballots took longer to process, the early returns were so skewed that even an easy win didn’t look like it for hours. And narrow wins? Well, just look at Georgia or Pennsylvania, which weren’t called for Biden for days.

Other states started processing mail-in ballots first, creating blue mirages. Around the same time that Trump appeared to be running away with Virginia, Biden appeared narrowly ahead in Ohio, where he actually lost by eight percentage points.

Now, the question is whether the mirages were one more weird 2020 thing, or whether they are now a long-term feature of U.S. politics.

More specifically: Should we expect to see mirages in the important elections happening around the country next Tuesday? Like the Virginia governor’s race between the Democrat Terry McAuliffe and the Republican Glenn Youngkin? Or the race for a seat on the Pennsylvania Supreme Court?

On the one hand, the state of the world, and of U.S. politics, is not what it was last fall. The coronavirus case rate is decreasing, about two-thirds of Americans have received at least one dose of a vaccine, and there are fewer restrictions on daily activities. And while Trump’s lies about fraud in last year’s election have infused nearly every corner of the Republican Party, his broadsides against early and mail voting are no longer in the headlines every day.

Christina Freundlich, a spokeswoman for McAuliffe, said the campaign’s data showed that many Democrats who voted by mail last year were returning to in-person voting on Election Day this year. Conversely, my colleague Nick Corasaniti reports that some Republicans are realizing that maligning early and mail voting could hurt them, and are encouraging their supporters to consider those methods. Together, these trends could narrow the partisan gap between early and Election Day ballots.

But narrowing is not eliminating.

Consider California, where Gov. Gavin Newsom soundly defeated a Republican recall effort last month. With two-thirds of ballots counted, he was about five percentage points ahead of where he ended up with all ballots counted. While the shift was irrelevant in a race Newsom won by a huge margin, it was more than large enough to have created a false impression if the race had been competitive.

McAuliffe’s campaign expects early returns in Virginia to be skewed toward Youngkin. That is likely to be the case regardless of who ultimately wins.

If the 2020 election is a guide, partial results in Pennsylvania — where voters will decide an expensive and contentious race for a state Supreme Court seat that is currently held by a Republican — could be similarly misleading.

It’s harder to predict whether we’ll see mirages elsewhere, much less their color, because many states have revised their election procedures since November.

In New Jersey, home to a governor’s race that is expected to be less competitive than Virginia’s (Gov. Phil Murphy, a Democrat, has a strong polling lead over his Republican opponent, Jack Ciattarelli), the early presidential returns were pretty similar to the final results. But that may be because New Jersey ran last year’s election almost entirely by mail, and it’s hard to have a mirage when almost everyone votes by the same method. The state is not doing that this time around.

But if we can’t predict where the mirages will be, we can say this: They will not in any way be evidence of foul play, as Trump so vociferously and falsely claimed after his loss. They’re just the way our elections work now. There is nothing nefarious about election administration procedures varying from state to state, or certain ballots being easier and faster to count than others.

So don’t celebrate — or panic — based on what you see at 9 p.m. You might just be in that alternate universe where Trump won Virginia and Biden won Ohio.

Change into comfy pajamas and check back in the morning.

nine days of ideas to remake our future

As world leaders gather in Glasgow for consequential climate change negotiations, join us at The New York Times Climate Hub to explore answers to one of the most urgent questions of our time: How do we adapt and thrive on a changing planet? Glasgow, Scotland, Nov. 3-11; in person and online. Get tickets at nytclimatehub.com.