OSHKOSH, Wis. — Steve VanderLoop, 64, heard that several of his co-workers at a manufacturing plant in Wisconsin had fallen ill from Covid-19. Then there was his brother-in-law’s entire family in nearby Washington County. A good friend in Appleton, up the shore of Lake Winnebago. And last week, the gut punch: Mr. VanderLoop’s 96-year-old mother learned she had the virus.

“It’s just crazy here now,” he said of his home state, standing on his porch on a block whose yards and fences were festooned with Biden signs, billowing Trump flags, hand-painted posters and bumper stickers with peace symbols.

He adjusted his cloth mask to cover his nose. “Then you throw in the campaign and everything else. It’s a big snowball.”

Mr. VanderLoop is one of many Wisconsinites living uncomfortably in a dual hot spot: of the coronavirus, which has spiked uncontrollably in counties throughout the state in recent weeks, and of the presidential campaign, whose attention seems to be unblinkingly focused on Wisconsin voters.

They have watched with growing alarm as coronavirus cases have exploded. Three of the four metro areas in the United States with the most cases per capita were in northeast Wisconsin, and one hospital in Green Bay, the third-largest city in the state, was nearly full this week.

Daily statewide deaths because of the coronavirus hit a record on Wednesday when officials reported that 26 people had succumbed to the virus. On Thursday, hospitalizations were at a high since the pandemic began, and more than 3,000 new cases were reported, another record.

Wisconsin is home to nearly half the places with the worst outbreaks now
By Lauren Leatherby·Data is as of Sept. 30 and limited to areas with at least 50,000 people | Sources: New York Times database of reports from state and local health agencies and hospitals; U.S. Census Bureau

The mayor of Oshkosh, Lori Palmeri, said she favored creating some new rules for bars and restaurants, which are free to operate at full capacity. But the City Council was unlikely to agree on any measures that could slow the virus’s spread, she said.

“I’m honestly not sure that anything we do right now will make a difference,” Ms. Palmeri said. “It’s too late.”

At a Kwik Trip in Oshkosh one afternoon this week, customers rushed in and out of the gas station, nearly everyone wearing face masks, as the state mask mandate requires. But officials said that they have been frustrated by a lack of compliance elsewhere, particularly when college bars in town close each night and dozens of people, drunk and maskless, pour into the streets.

“We know what’s making it worse here,” said Susan Sanvidge, 74, a graphic designer. “It’s the schools, and it’s the bars. And half of the people think Covid is a hoax anyway.” 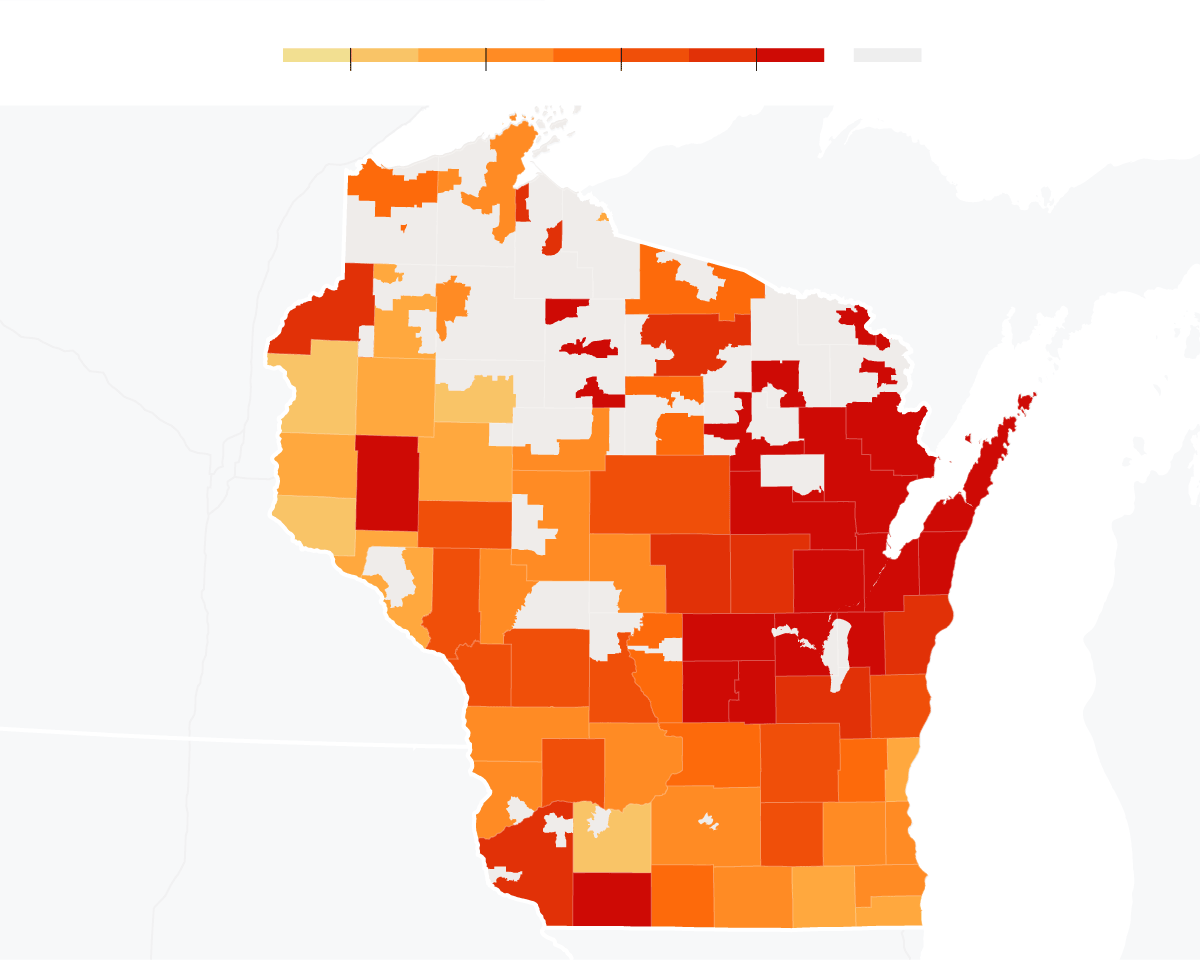 Average daily cases per 100,000 people in the past week 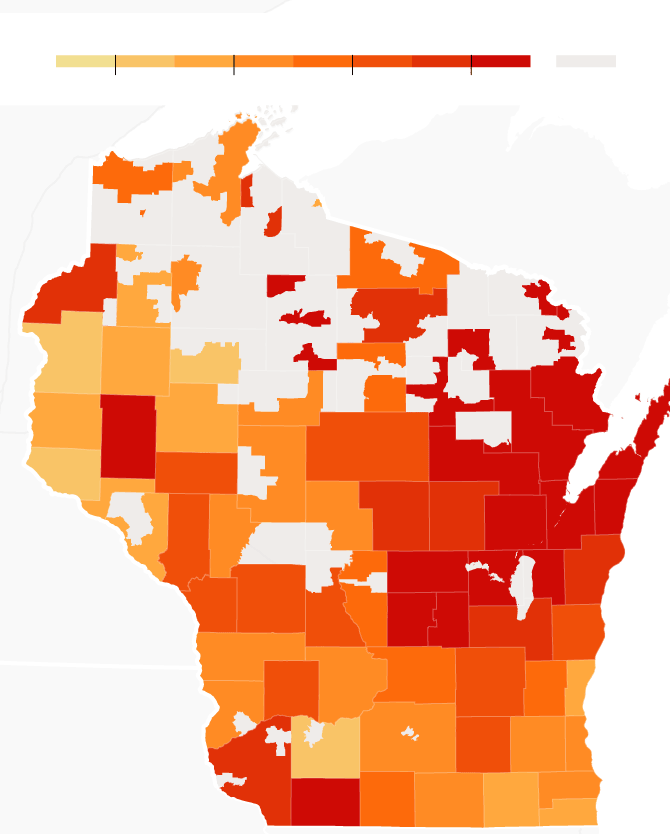 Average daily cases per 100,000 people in the past week

By Lauren Leatherby·Data is as of Sept. 30 | Source: New York Times database of reports from state and local health agencies and hospitals

If there is one thing people in Wisconsin can agree on, it is this: Their nerves are frayed.

The constant whirl of political activity in this pivotal swing state has only intensified with little more than a month to go before the election. President Trump visited Oshkosh in August, holding a small event at the airport, and was planning to hold rallies on Saturday in Green Bay and La Crosse. Those plans were changed after the mayor of La Crosse pleaded for the event to be canceled, citing the coronavirus spike in the area; the president’s campaign moved the location to Janesville on Thursday, saying there was an issue with “the lease” of the location in La Crosse.

But that was before Mr. Trump tested positive for the coronavirus. His physician said the president would stay isolated in the White House for now, but did not specify for how long.

Joseph R. Biden Jr., the Democratic nominee, campaigned in Wisconsin in September, visiting an aluminum foundry in Manitowoc, a city on the western shore of Lake Michigan. Both candidates have focused on the state, which both parties see as winnable: In 2016, Mr. Trump upended expectations by winning Wisconsin by about 22,700 votes, the first Republican to take the state in a presidential contest since 1984.

To watch an hour of the evening news in Wisconsin means enduring loud political ads on a mind-numbing repeat. Canvassers rap on front doors and ask for support. Mailboxes are stuffed with shiny pamphlets extolling the virtues of candidates for president, State Assembly and State Senate. “Every day, more to recycle,” one weary Wisconsin voter said.

Charles Franklin, a pollster at Marquette Law School in Milwaukee, said he had received between four and seven unsolicited texts a day from the Trump campaign.

“They’re all addressed to ‘Tom,’” he said. “I suspect their data infrastructure isn’t up to the task.” (His latest survey showed Mr. Biden with a slight lead over Mr. Trump.)

Doug Gieryn, the health officer for Winnebago County, which includes Oshkosh, said he had seen cases tied to cookouts, weddings and birthday parties. Public schools are now closed in part of his county, but club sports and fall bowling leagues, popular during the months of Wisconsin chill, have picked back up.

“I truly feel like people are just carrying on as usual,” Mr. Gieryn said. “It’s an acceptance that has settled in.”

Winnebago County has been a bellwether in statewide and presidential elections, voting for Barack Obama in 2008 and 2012, and then Mr. Trump by seven percentage points in 2016. It also has one of the highest rates of the coronavirus in the entire country — close to 150 new cases a day in a county of 172,000 people.

Contact tracing has been difficult, if not impossible. It now takes at least four days to process coronavirus test results — and at least another 24 hours before health department employees can find the time to call an infected person to say the test was positive.

The National Guard has set up testing, but on Wednesday morning, a sign at the entrance warned anxious people driving into the parking lot: OUR WAIT TIME IS APPROXIMATELY 3 HOURS.

“It makes you feel like, geez, what are we doing here?” said Mr. Gieryn, whose staff has been worked to exhaustion. “It’s just going to stay this way until we have some agreement that we’re going to have some restrictions.”

He paused. “It’s going to get worse.”

Gov. Tony Evers, a Democrat, extended a mask mandate until November and warned Wisconsinites this week that the situation was critical.

“We are nine months into this pandemic,” Mr. Evers said. “It’s not slowing down. It’s picking up speed. We have got to put the brakes on this pandemic.”

In the State Legislature, the fights between Mr. Evers and the Republicans who hold the majority have extended to the coronavirus. Republicans have opposed mask mandates and pushed to derail Mr. Evers’s statewide order imposing restrictions on the public in the spring.

For candidates who are on the ballot in November, the issues of the coronavirus and the campaign have begun colliding as Election Day approaches.

“Everything changed with this campaign,” said Aaron Wojciechowski, a Democratic candidate for the State Senate. “We’re talking to people on phones. We’re not canvassing like normal.”

One Wisconsin voter, Dennis Smith, 73, said he did not blame the federal government for the recent surge in coronavirus cases.

The president has done some things right, Mr. Smith said, and he is learning more about how to manage the coronavirus as the months have passed. “I think he’s catching up,” he said.

Others said they were pushed in the direction of Mr. Biden after considering Mr. Trump’s response.

Jon Doemel, owner of ZaRonis, a popular pizzeria in Wisconsin, is still undecided in the November election — “I’m liberal in heart but conservative in government,” he said.

“I don’t appreciate the fact that he was downplaying it,” Mr. Doemel said of Mr. Trump’s early, dismissive statements about the coronavirus. “He should have been pushing masks all along.”

Wisconsin residents who have been careful to wear a mask in public and social distance said they sometimes feel like they are in the minority.

Rebecca Selle, 38, a cancer researcher in the Milwaukee suburbs, was invited to a wedding in September that she and her husband reluctantly decided to attend.

They arrived to a scene that could have been lifted from a carefree pre-Covid era: 200 people crammed together in a banquet hall, pouring glasses of beer from communal pitchers, hugging, crowding together and posing for pictures. There was even a buffet.

“It was horrifying,” she said. She and her husband dropped their place cards and left after a few minutes. “You would never know that a pandemic was happening.”