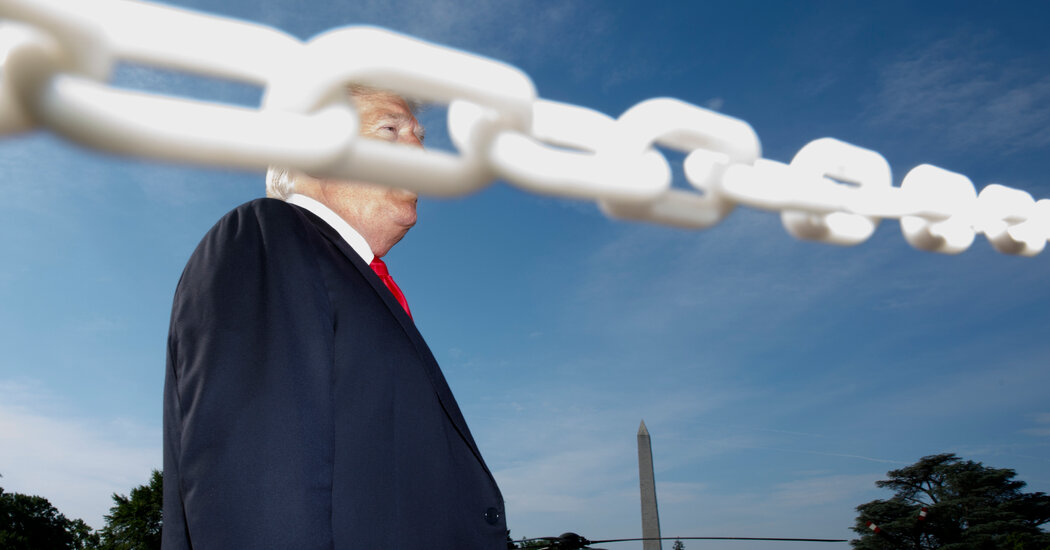 So many investigations, people.

“This is a continuation of the greatest Witch Hunt in American history,” Donald Trump said, complaining about the multiple probes into his business practices.

That was in an online statement practically no one seems to have read. Truly, of all the former president’s problems, his greatest woe has to be that Twitter ban. As The Washington Post cruelly reported, the new website he’s put up as a replacement has “attracted fewer estimated visitors than the pet-adoption service Petfinder and the recipe site Delish.”

But Trump is certainly getting a lot of attention on the non-fan front. Here in New York he just lost an 18-month battle to keep the Manhattan district attorney from peeping at his financial records. As we all know, Trump is an absolute shrinking violet when it comes to his tax returns, and he made two trips to the Supreme Court trying to keep them out of the hands of anybody with the power of subpoena.

In Georgia, prosecutors are investigating Trump’s postelection call to Secretary of State Brad Raffensperger. You’ll remember the one in which he asked Raffensperger to “find” him some more votes. It does seem possible the Donald is going to spend the rest of his life struggling to stay out of jail, doesn’t it?

The Manhattan D.A., Cyrus Vance Jr., has reportedly convened a grand jury that’ll be looking into Trumpian … issues. The whole probe could take six months and readers, I want you to send out a couple of good thoughts every now and then to those grand jury members. How many times have you rejoiced that you don’t have to think about Donald Trump every single day anymore? How would you feel about half a year of constant contemplation?

Vance is now working with the state attorney general, Letitia James, who has been investigating — among multitudinous other things — a $25 million tax deduction Trump took for a failed housing development project in California.

If Trump has any genuine business acumen, it’s been his ability to simultaneously present himself as a real estate genius for the purpose of bank loans while also claiming massive business losses when he’s dealing with the Internal Revenue Service.

But be fair: You could certainly make a lot of good arguments for Trump’s being a loser. If any of his business has survived, it’s at least in part because you the taxpayer were helping to bail him out by paying Trump properties for rooms the Secret Service rented while guarding the Trumps.

And remember the $600,000 you the taxpayer spent in 2019 to shuttle Mike Pence between meetings in Dublin and his accommodations at the Trump hotel 180 miles away? By the way, whatever happened to Mike? Well, he seems to have moved back to Indiana to prepare to run for president in 2024. Dwell on that for a minute.

Anyway, when it comes to making money off the government, the Trumpian beat goes on. Recently we learned that the minute he left the White House and moved to Mar-a-Lago, he began charging the Secret Service about $400 a night for a room at his resort.

It’s possible that the only part of the real estate business Trump is actually any good at is finding ways to bill the taxpayer for this kind of stuff. But once the poor grand jury finishes its labors we may know a whole lot more. Some of his minions are apparently jabbering to investigators like cicadas.

Here in New York, besides all the investigations, the city has been trying to can the Trump company that runs its public golf course in the Bronx. The family — led by son Eric — is demanding $30 million in return.

New Yorkers, would you rather:

A) Cough up some money to make Trumps go away.

B) Find a mayoral candidate who will countersue for $30 million worth of public irritation.

Experts say this fight could go on for years. Meanwhile, north of the city, concerned citizens have been trying to erase Trump’s name from a state park, located on land he donated after the collapse of his original plan to build a golf course. The Trump Organization says it may go to court if there’s a change. Lots of ways of getting around this, but I do like the one proposed to PolitiFact by a legal expert, who mentioned the possibility of a sign saying, “Unnamed State Park, next right.”

It’ll be a long while before we find out how these investigations turn out. But it’s already crystal clear that if you took a sweeping view of Trump’s empire, the two perpetually recurring motifs would be “golf” and “failed development.”

This gives me the opportunity to note that during one of those early real estate disasters, I wrote a column referring to him as “an extremely well-dressed pile of debt, wearing an unusual haircut.” That was in 1992, and next year I want you to remind me to celebrate my 30th anniversary of making fun of Donald Trump.