The known global death toll surpasses 200,000, but the real toll is a mystery.

The coronavirus pandemic has now killed more than 200,000 people and sickened more than 2.9 million worldwide, according to data collected by The New York Times. At least 177 countries have reported cases of Covid-19, the disease caused by the virus.

The actual toll is higher by an unknown degree, and will remain so for some time. A Times review of mortality data in 12 countries showed that official tallies have undercounted deaths during the outbreak, largely because of limited testing. Several thousand people in New York City who died without testing positive for Covid-19, and thousands more in other countries, are considered probable cases.

Still, the official numbers offer a sense of the scale and speed of the pandemic. The pace of the virus’s spread can be measured in doubling, and the known global death count surpassed 100,000 on April 10, just more than two weeks ago.

Only two other countries have confirmed more than 20,000 deaths: France, with more than 22,800; and Britain, which crossed into that range on Saturday. Germany and Turkey both have outbreaks of more than 100,000 cases, but their official death tolls are lower.

Deaths per capita offers another measure of the pandemic. Belgium, with about 12 million people, has suffered the second highest such toll, according to the Times database, with 62 deaths per 100,000 people. But Belgium’s toll may reflect its more complete counting of deaths. Unlike many other countries, Belgium includes in its count deaths at nursing homes, where clustered, elderly populations are especially vulnerable. Spain’s reported toll is 50 deaths per 100,000 people, and Italy’s is 44. The United States’s is 15 per 100,000 people.

Most countries do not report deaths that occur outside of hospitals. Deaths that occurred before the virus was known to be circulating — like two in Santa Clara County, Calif., in February — are only starting to be re-examined. Further, some countries may be deliberately undercounting their tolls. 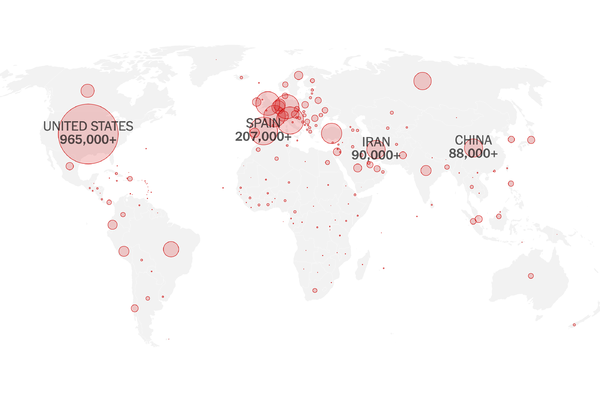 As summer approaches, governors fear the lure of warm weather will undo months of progress.

In Southern California, a heat wave this weekend foreshadowed the likely challenges that lay ahead for governors and mayors trying to sustain social distancing efforts as spring turns to summer.

Despite pleas from state and local leaders to stay home, tens of thousands of people flocked to beaches that were open in Orange County on Saturday. Photographs of Newport Beach and Huntington Beach showed large crowds staking out patches of sand with beach towels and umbrellas. The Orange County Register reported that as many as 40,000 people went to the beach in Newport Beach on Friday.

In neighboring Los Angeles County, all beaches remained closed over the weekend.

“We won’t let one weekend undo a month of progress,” Mayor Eric Garcetti of Los Angeles wrote on Twitter on Sunday. “While the sunshine is tempting, we’re staying home to save lives. The places we love — our beaches, hiking trails — will still be there when this is over. And by staying home, we’re making sure our loved ones will be too.”

Dr. Deborah Birx, the White House coronavirus response coordinator, said Americans should expect social distancing guidelines to continue for months. “Social distancing will be with us through the summer,” she said Sunday on NBC’s “Meet the Press.”

In New York, Gov. Andrew M. Cuomo, while encouraging continued social distancing, said during his daily briefing on Sunday that it was unreasonable to expect people to stay inside all the time when summer arrives, especially in the most populous part of the state.

“We need summer activities in downstate New York,” Mr. Cuomo said. “You can’t tell people in a dense urban environment all through the summer months: ‘We don’t have anything for you to do. Stay in your apartment with the three kids.’ That doesn’t work. There’s a sanity equation here also that we have to take into consideration.”

States have struggled to navigate competing demands to keep residents safe and the economy open. A handful, including Alaska, Georgia, Oklahoma, South Carolina and Tennessee, have begun partly reopening some businesses, like hair salons, gyms and bowling alleys.

The reopenings have led to criticism, particularly in Georgia where several African-American leaders, including the mayors of Atlanta, Savannah and Augusta, slammed the decision by Gov. Brian Kemp to allow gyms, barbershops, tattoo parlors and spas to reopen last Friday.

That stance seemed to put them in agreement with President Trump, who said the move was “too soon,” although he had earlier encouraged protests against governors who had imposed stay-at-home orders.

Mr. Trump on Sunday also pushed back on news reports, first published by Politico and The Wall Street Journal, that some of his senior aides, including his new chief of staff, Mark Meadows, are discussing replacing Alex M. Azar II, the Health and Human Services secretary, after a string of news reports about the administration’s slow response to the coronavirus and a controversy about an ousted department official.

On Twitter, Mr. Trump suggested he was not going to fire the health secretary, saying “Alex is doing an excellent job!”

Iran, which has had one of the world’s worst outbreaks, will begin reopening mosques.

Under pressure from religious institutions, Iran’s government on Sunday announced it would reopen some 127 religious sites, including shrines and mosques, in about a week at locations around the country, which has endured one of the world’s worst coronavirus outbreaks.

President Hassan Rouhani said Friday prayers, canceled since the middle of March, would resume at the reopened sites but protocols would have to be observed.

As Iran has begun gradually lifting restrictions in the past two weeks and reopening businesses in an attempt to salvage its battered economy, the calls to open religious shrines grew louder. The announcement also coincides with the month of Ramadan, when Muslims fast and gather nightly for communal prayers and sermons.

The closing and opening of religious sites, particularly the two prominent Shia shrines in Qom and Mashhad, have been a source of contention between health officials and religious authorities. Iran’s coronavirus outbreak started in the city of Qom and spread to Iran and multiple neighboring countries in the region through pilgrims visiting the shrine. Mr. Rouhani was widely criticized for not enforcing a swift shutdown of the often crowded religious sites.

The hard-line newspaper Kayhan, a mouthpiece for Supreme Leader Ayatollah Ali Khamenei, wrote that if parks and shopping malls opened then mosques should open, too, and claimed “religious shrines had a small role in spreading the coronavirus.”

The health ministry’s latest tally on Sunday was 90,481 people infected and 5,710 dead, although health experts and local government officials have said the numbers are several times higher than the official account.

Mr. Rouhani has repeatedly said that the peak of the virus has passed, but health officials have warned that lifting restrictions too quickly could rapidly lead to a resurgence of the virus and said at least three provinces are still considered red zones.

“Iran is still in the escalation trajectory of contracting coronavirus and reaching the peak,” said Hossein Erfani, the Health Ministry’s head of infectious disease. “The public should not think the story of coronavirus is over and they can go around freely.”

After enduring the longest lockdown in Europe and one of the world’s most deadly coronavirus outbreaks, Italians heard the details on Sunday of Prime Minister Giuseppe Conte’s plan to ease restrictions and reopen their economy starting on May 4.

“Now begins the phase, for everybody, of living with the virus,” Mr. Conte said in a prime-time address on Sunday night, adding that a failure to respect social distancing would cause infections to climb again and the government to “close the tap.”

“If you love Italy,” he implored, “maintain distance.”

The government has had to constantly weigh Italy’s economic interests, and those of millions of struggling Italians, with the public health of the entire country. It has been an excruciating balance, but Mr. Conte’s government has decided that the country, which entered a lockdown on March 10, could not stay closed indefinitely.

While gatherings and parties remain banned, and travel remains closely regulated, with special auto-certification forms required for movement, Mr. Conte said that the visiting of relatives will be allowed to people within Italian regions on May 4.

“There always has to be a reason to move around,” he said.

Schools, he said, would remain closed for the rest of the academic year, as his scientific advisers had informed him that the return of students could set off an explosion of cases.

He added that the danger was intensified by the high average age of Italy’s teachers.

Mr. Conte fixed a price for individual masks at 50 cents to prevent price gouging and said that the manufacturing and construction sectors would be allowed to operate as long as workers observed social distancing and wore masks.

The official count of virus-related deaths in Italy stands at 26,644, but experts say the real number is far higher. Mr. Conte said that funerals would once again be permitted beginning on May 4, but they would be limited to 15 people, preferably in an outdoor setting.

Parks may also reopen on that date, subject to the approval of local mayors and regional governors, and outdoor exercise, such as jogging, could be carried out more than 200 meters from home.

Mr. Conte also gave a preview of businesses that could reopen down the road. On May 18, he said, stores could possibly open. Coffee bars, restaurants, hairdressers and beauticians would open no sooner than June 1.

Asked by a reporter when free movement could return, he said that a potential phase three would arrive with the discovery of a vaccine. Until then, he said, “We must get ready for phase 2.”

The World Health Organization on Friday warned against relying on antibody tests for policy decisions as leaders consider how to reopen their economies and reintegrate society. While countries like Italy have even floated the idea of “immunity passports” for people who test positive, W.H.O. officials noted that it is not known to what extent people carrying antibodies are immune to the virus.

(The W.H.O. on Saturday backed off an earlier assertion that people with antibodies may not be immune at all.)

But widespread testing has started nonetheless, and important decisions are likely to flow from the results. The National Institutes of Health, the Centers for Disease Control and Prevention and virtually every university with an epidemiology department has begun antibody surveys in communities across the United States.

The goal of most of these projects is to get a handle on the size and nature of the epidemic here, rather than to guide decisions about reopening the economy. But now scientists are racing to fine-tune the tests and to learn more about what having antibodies actually means, both for the patient and for the community.

Few scientists ever imagined that these tests would become an instrument of public policy — and many are uncomfortable with the idea. Antibody tests, which show who has been infected, are often inaccurate, recent research suggests, and it is not clear whether a positive result actually signals immunity to the coronavirus.

Last week, a survey of New Yorkers found that one in five city residents carried antibodies to the new coronavirus.

If one in five residents in hard-hit New York City has been exposed to the virus, Carl Bergstrom, an infectious diseases expert at the University of Washington in Seattle, and others have said, then four in five are still vulnerable — and that underscores how far we are from the pandemic’s end.

New York’s results suggested a death rate between 0.5 and 1 percent, figures some conservative commentators have argued is too low to justify statewide lockdowns.

Public health experts like Dr. Bergstrom took the opposite view. “If the mortality rate is 1 percent, we’re looking at 2 million deaths, which is unprecedented in our nation’s history and unimaginable,” he said.