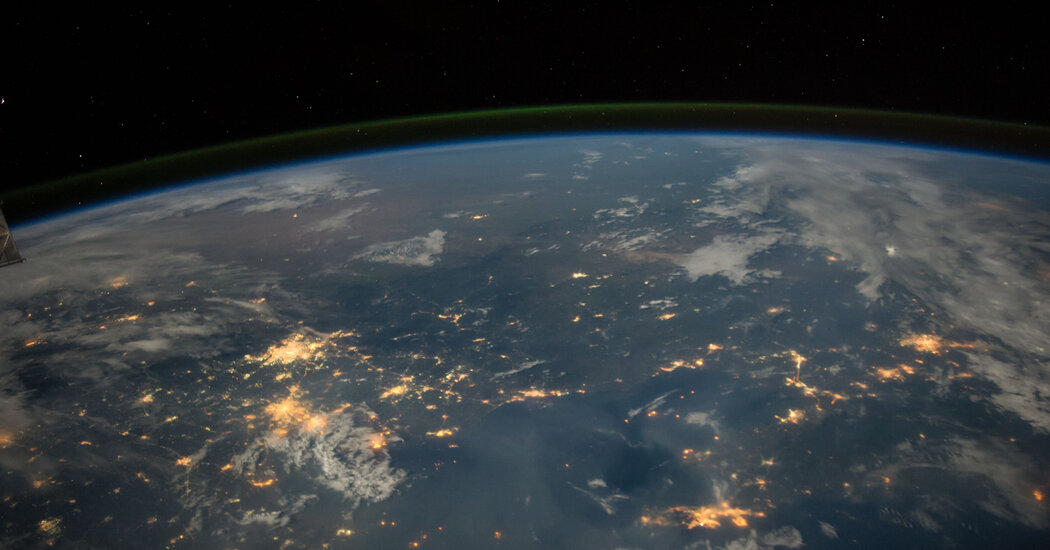 In a recent essay on great-power competition and climate change, Rob Litwak, an arms control expert at the Wilson Center, recalled a question that President Ronald Reagan posed to Mikhail Gorbachev, the Soviet leader, after they took a walk during their 1985 Lake Geneva summit.

As Gorbachev put it later: “President Reagan suddenly said to me, ‘What would you do if the United States were suddenly attacked by someone from outer space? Would you help us?’”

It sure is, because it’s not at all clear, given the recent upsurge in raw great-power competition, that Russia, China or America would help one another in the face of an invasion of space aliens threatening us all. Litwak’s point in retelling that story, of course, is that today we are facing a similar, world-stressing threat — not from space aliens but from a much more familiar and once seemingly benign force: our climate.

Global warming is challenging every nation with more extreme weather, wildfires and sea level rise and once-in-a-century storms coming much more frequently. Unlike with a space alien, though, there’s zero possibility of negotiating with Mother Nature. She does only whatever chemistry, biology and physics dictate, and she has no clue or interest in where the borders of Russia, America or China stop and start. She’s got the whole wide world in her hands — as she demonstrated with the Covid-19 pandemic.

Yet neither China’s president, Xi Jinping, nor Russia’s president, Vladimir Putin, is attending the Glasgow climate summit, which opened Sunday, in person with President Biden and many other world leaders. And even more important, The Washington Post reported last week that some in the Chinese leadership want to resist any substantial cooperation with America on climate issues until the United States dials down its pressure on China “over human rights, Hong Kong, Taiwan, trade and a range of other issues.”

We’ve never seen this tactic before from Beijing: We’ll clean our air, but only if you let us buzz Taiwan’s airspace and choke off the air of freedom in Hong Kong.

A senior U.S. official told me that there is actually a lot of division in Beijing right now on the wisdom of this sort of wolf-warrior diplomatic strategy on climate, which is being pushed by Foreign Minister Wang Yi. There are definitely other Chinese leaders who want to collaborate with Washington and understand that on climate, we sink or swim together. Still, even a hint of this sort of planet-Earth-hostage-taking strategy by some senior Chinese officials is very troubling and needs to be called out.

“The window for humanity to avoid unmanageable climate change is narrowing,” Litwak noted in his Wilson Center essay. “China, the United States and Russia are, respectively, the first, second and fourth largest carbon emitters. Yet at the precise historical juncture when unprecedented global cooperation is necessary to forestall catastrophe, the world is on the brink of unconstrained geostrategic competition. Indeed, U.S. relations with Russia and China are the worst they have been since the end of the Cold War.”

There is never a good time for a great-power conflict. And we’ve already seen how deadly the lack of global cooperation in the face of Mother Nature’s Covid-19 stressor has been. But this is even more dangerous. A shootout between the United States and China over Taiwan or between NATO and Russia over Ukraine — just as human-made climate change is putting a gun to all of our heads — would be insane. But it’s a real possibility.

What we need instead of an arms race or a space race is an Earth race — a great-power competition over which country is rising fastest and farthest to enable a world of net-zero carbon emissions so men and women can thrive here on Earth. I’d love to see Biden do a real throw down to Xi and Putin in his speech in Glasgow for that race.

Biden could say: “I know that climate change is a global problem and that if we clean our air and you don’t clean yours, there is no way to solve it. But we’re not going to use that as an excuse, or let our oil and coal industries use that as an excuse, to do nothing until you do. Because there are 7.9 billion people on the planet today and by 2030, there will be 600 million more — 600 million more! That means that, climate change or no climate change, just having that many more people to feed, house and transport will guarantee that clean power, clean water and energy-efficient buildings and cars will be the next great global industry. Otherwise, we’ll all choke on pollution. So if you all want to keep burning coal and give our clean industries a five-year head start in the next great global industry, make my day. Myself, I am going to declare America’s intention to win the Earth race, to make America the first country to invent and deploy the most clean-power technologies and drive them down the cost curve so that everyone on the planet can afford them.’’

Challenging China and Russia over who can produce the most tools for global resilience, not just resistance, is a way for America to reclaim some moral leadership on the world stage and focus our economy, and our competitors, on the most important industries of the future. Unless we humans want to be a bad biological experiment, a zero-carbon grid, zero-emissions transportation, zero-carbon/zero-net-energy buildings and zero-waste manufacturing indeed will — and must — be the next great global industry.

And by the way, while Russia is currently not a player in that competition, I would not bet against China.

Hal Harvey, who runs the climate analytics firm Energy Innovation and helps to advise governments on clean energy transitions, notes that the United States has set out a very clear goal of when it wants to get to a net-zero carbon-emitting economy — 2050 — and Biden is now trying to fill in the details with specific plans. Alas, without a single vote of support from Republicans.

China, by contrast, Harvey added, is building incredibly detailed plans on how to decarbonize, which Beijing could scale up very quickly — but it has been less detailed in setting hard dates for fulfillment.

Since Xi right now is focused on keeping the Chinese economy growing while he tries to lock in his third term as president, he is not going to do anything to curb growth in China in ways that could sap his popularity. So China will keep burning a lot of coal for a while. But don’t be fooled: Beijing is also building huge amounts of solar, wind, hydro and nuclear power. It’s game on.

As long as both countries keep focused on the Earth race, it almost doesn’t matter which one wins, because together they will drive down the costs of clean power for everyone. If they slow down or get diverted, though, we may wish for some space aliens to take us to their planet.