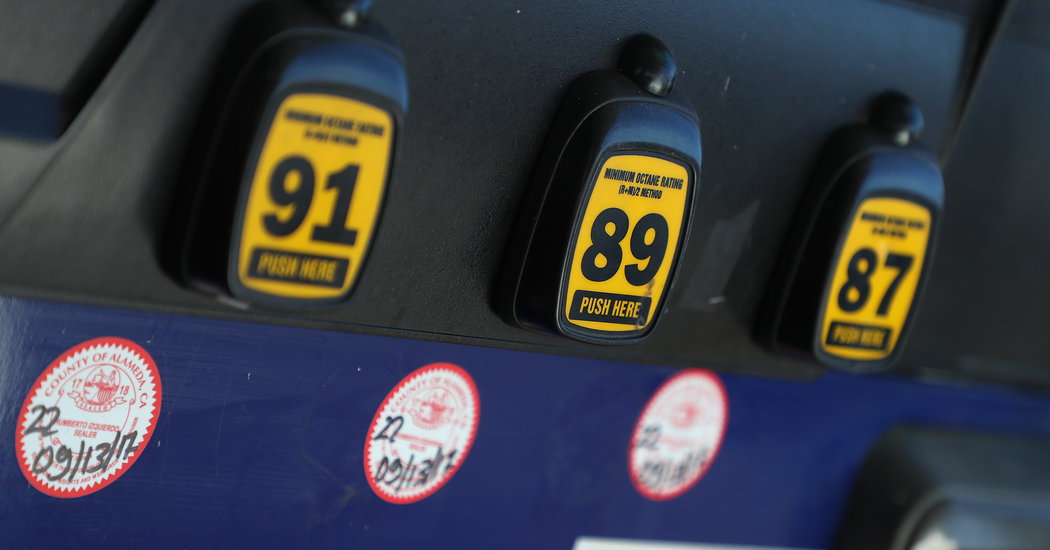 A plan is under development in about a dozen Northeast and Mid-Atlantic States to tackle the country’s biggest source of greenhouse emissions, cut road congestion, clean up the air, improve public transit and ramp up electric cars.

Improbably, a Republican governor is helping to lead the way among his mostly Democratic regional neighbors. But despite this alliance, the politics are tricky.

The plan would cost money, and to pay for it, the price of gasoline at the pump would rise in participating states. The financing measure is not a gas tax, strictly speaking, but it would have a similar effect, increasing prices perhaps 8 or 9 cents a gallon.

The governors may be casting a wary eye across the Atlantic. In France, President Emmanuel Macron’s plan to place a green tax on fuel in 2018 set off the Yellow Vest movement, which quickly turned into a broad protest against inequality. The fee under consideration by the governors would be much smaller, but sensible politicians certainly need to be careful about new measures that burden working people. In this case, the payoff — investments in modernizing transportation — would be enormous.

Many citizens who care about the environment seem not to have heard of this plan. Unfortunately, the same cannot be said of the climate disinformation network founded by Charles Koch and his brother David, who died last year. That network and allied groups are working to kill the measure, with at least 18 right-leaning organizations in the region — some of them merely Koch front groups — blitzing newspapers with letters and cajoling motorists to badger politicians to stop the effort.

That alone ought to tell you it is a good idea. To get it across the finish line, urgent efforts are needed from governors, legislators, environmental groups and especially from citizens.

Despite the paralysis in Washington on measures to safeguard the climate, the country has made some headway, cutting greenhouse gas emissions about 12 percent since 2005. But nearly all that progress has come in one segment of the economy: the generation of electric power, as natural gas, wind turbines and solar panels displace coal-burning power plants.

In most other economic sectors, emissions are flat or rising. The country is far off-track to meet the cuts it pledged to other nations at big climate meetings, in Copenhagen in 2009 and in Paris in 2015. The Trump administration does not care, and indeed is actively working to undermine clean energy in favor of fossil fuels.

Cars and trucks are especially vexing, with Americans not only driving more, but increasingly buying gas hogs like sport-utility vehicles. Even in California, the state trying hardest to fight climate change, transportation is the largest source of emissions — 40 percent of the total — and have only just begun to fall.

In the Northeast, a coalition of state leaders has been working for several years to figure out a way to turn the corner and begin cutting transport emissions. The idea is to mandate that fuel wholesalers buy permits for the emissions that their products create, then establish a marketplace where those permits can be bought and sold. That market would set the price of permits, and the wholesalers would then have to decide how much of the increased cost of their operations to pass along at the pump.

The gasoline price increase would depend on how ambitious the states decide to be with their emissions cuts, which is one aspect of the plan that has not been fully decided. But the likelihood is that they will start modestly, leading to a price increase of below 10 cents a gallon, less than gas prices typically vary over the course of a year.

Americans burn so much gasoline that even a pass-along price increase that small would raise billions of dollars a year in the Northeast. It would likely give many of the states five times as much money as they have now to spend on clean transportation.

The money would go to measures that directly cut emissions. Improvements in mass transit systems, to lure people out of their cars, would be a major goal. Another would be helping people who must drive switch to electric cars, through rebates and the installation of chargers along the highways. Some states even intend to invest in fast internet access for rural areas, on the logic that people could work from home some days, as many city dwellers already do, and stay off the roads.

By design, the plan resembles a similar approach the Northeastern states took to cutting emissions from power plants. That plan, the Regional Greenhouse Gas Initiative, has been a big success. The new one, the Transportation and Climate Initiative, is meant to test whether this approach will work with vehicle emissions. In most states, legislatures would have to approve the proposal.

The Koch network’s disinformation campaign has already claimed one victory. New Hampshire Gov. Chris Sununu, a Republican with a poor record on climate initiatives, pulled his state out of the discussions, declaring as he did so: “I will not force Granite Staters to pay more for their gas just to subsidize other states’ crumbling infrastructure.”

The premise of that statement is a lie. The governor surely knows that a core feature of the plan is that each state would get to keep the money it raises, deciding its own investment priorities. Will other governors reject this kind of demagogy to embrace a good-sense plan?

You might imagine this argument is playing out along party lines, but it is not. Republican Gov. Charlie Baker of Massachusetts has been one of the leaders driving the plan forward, and at least one other Republican, Gov. Larry Hogan of Maryland, is considering it. Most of the governors in the region are Democrats and they remain at the table, with Rhode Island Gov. Gina Raimondo in the vanguard. Unfortunately, one or two governors may be wavering under the Koch assault.

Whether the governors, as a group, are putting enough energy into dragging this plan across the finish line is another question. Especially curious is the case of New York State. It has participated in the discussions, but Gov. Andrew M. Cuomo has been silent regarding his intentions. This is worrisome, given that New York, with 20 million people, is the most populous state in the region by far.

Will he or won’t he go for it? Mr. Cuomo is under intense political pressure to repair New York City’s ailing subway system, and this small gasoline fee would be a large source of money to help with that problem. Low-wage workers in particular would stand to benefit directly from new investments in mass transportation. But Mr. Cuomo knows it is not going to be popular in upstate New York, where people both resent New York City and depend on cars. Perhaps he could offer a specific pledge to upstate voters about more broadband internet and other investments?

For Mr. Cuomo, this situation is an opportunity. He is already an environmental champion, recently committing New York to a broad suite of climate policies. But the state still needs practical measures to turn those goals into reality, and the transport plan is a prime candidate.

It is astonishing that even at this late date, with devastating fires and heat waves spreading around the world, the Koch empire continues to put short-term profits over the livability of the planet. Our environmental groups, as well as ordinary citizens, need to let Mr. Cuomo and the other governors in the region know they support this plan.