Their plan to appear together over the last weekend before the primary, appears aimed at creating a bloc against the presumed front-runner, Eric Adams.

Andrew Yang had been hinting for days that he might form an alliance with one of his rivals in the New York City mayor’s race to stop the front-runner, Eric Adams, from winning the Democratic primary.

On Friday night, Mr. Yang announced he would spend Saturday campaigning with Kathryn Garcia, another leading candidate, in an apparent signal of a likely cross-endorsement, or something close to it.

An email from his campaign said Mr. Yang and Ms. Garcia planned on Saturday to attend a rally, greet voters and hold a news conference together, grabbing attention in the final days of the race. A spokesman for Mr. Yang, Jake Sporn, would not say if the joint events meant the candidates would cross-endorse each other.

Cross-endorsements are a common feature of ranked-choice elections — a voting system that New York City is using for the first time in a mayoral election. Candidates encourage their supporters to rank another candidate second on their ballot, boosting both campaigns.

For months, Mr. Yang, a 2020 presidential candidate, has made his respect for Ms. Garcia, the city’s former sanitation commissioner, well known. Mr. Yang had said that she was his second choice and that he would want her to serve in his administration, but Ms. Garcia had not returned the favor.

Both candidates are trying to stall momentum by Mr. Adams, the Brooklyn borough president, who has been leading in the polls. Mr. Adams, who has faced questions over his residency and his finances in recent days, stood before supporters in Harlem on Friday to dismiss the growing attacks from his rivals.

“All the stuff you are seeing out there is to throw Eric off his game,” Mr. Adams said. “That’s all this is. And they are not going to do it.”

For days, Mr. Adams has advised those who support him, “no distractions, stay focused and grind.” On Friday, his opponents appeared to be heeding that message as well, hopping between boroughs for campaign events and making their final appeals.

The flurry of activity heading into the weekend reflected the candidates’ urgent efforts to get their supporters to cast ballots in the final days of early voting, which ends Sunday, and to the polls on Tuesday. As of Friday, 130,000 people had voted early, a relatively small number that suggested much the electorate could still be up for grabs.

As he has often done in the weeks since Mr. Adams began to consolidate his lead in the race, Mr. Yang criticized his rival over his ties to Mayor Bill de Blasio.

“We need to break the stranglehold of the special interests that have been running our city into the ground,” Mr. Yang said.

Mr. Yang also continued to focus on public safety, an issue that has dominated the campaign’s late stages amid a rise in violent crimes, even as the rate of such offenses remains well below where it was in the 1980s and ’90s. 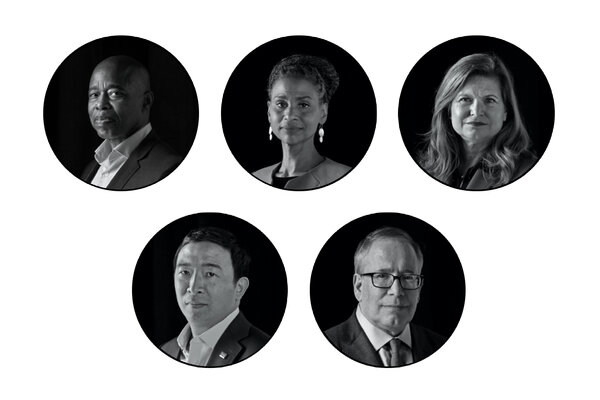 Here is how the leading Democratic candidates for mayor are pitching themselves to New Yorkers in the final stretch.

Voters who are still undecided, Mr. Yang said, should look to the unions for guidance on choosing a candidate. Mr. Yang did not mention that the fire officers’ union, which represents lieutenants, captains, and chiefs, has endorsed Mr. Adams.

“I’m the right choice for New York City, according to the firefighters, the police captains,” Mr. Yang said. “And as New Yorkers discover this in the next number of days, they’re going to come out and vote for me.”

Maya Wiley, a former counsel to Mr. de Blasio who has also taken aim at Mr. Adams, held a rally in Brooklyn where she spoke of her support for police reform.

Surrounded by a crowd of mostly Black supporters outside the Brooklyn Public Library’s main branch, on Grand Army Plaza — a frequent site of protests after the police killing of George Floyd last year — Ms. Wiley invoked the Black Lives Matter movement and promised that she would bring its message to City Hall.

Representative Yvette Clarke, a Brooklyn Democrat who has endorsed Ms. Wiley, urged voters to advance the movement’s goals and not to be swayed by appeals for more aggressive policing.

“There are dangerous candidates out here,” Mr. Foy, who was an aide to Mr. de Blasio before he was mayor, said. “We have got to pull the curtain back and call out these wolves in sheep’s clothing.”

Mr. Foy accused Ms. Garcia of trying to cozy up to New York’s largest police union, whose leaders are politically conservative. The union’s president asked officers in an email, obtained by The New York Times, to rank Ms. Garcia, Mr. Adams or Mr. Yang on their ballots — and not other candidates.

Ms. Garcia scoffed at the comment later, telling reporters that she had not “had any conversation” with the union at all.

At his Harlem event, Mr. Adams dismissed the criticisms leveled against him by Ms. Wiley and her supporters, deriding her as a “college professor” with little practical understanding of public safety.

“We need a professional that knows how to keep this city safe,” Mr. Adams said. “My résumé out-beats everyone on that stage. They know it, I know it.”

Standing alongside Mr. Adams were several anti-violence activists and parents of people who had been killed in violent incidents. He and his supporters continued to argue that his experience made him the best candidate to both keep residents’ safe and address discriminatory policing.

“If you break the law, you are going to be accountable for it under Eric Adams,” said Hazel N. Dukes, president of the N.A.A.C.P.’s New York chapter. “How do I know that? Because I trained him.”

Asked about issues related to his real estate holdings, including a co-op apartment he bought in Brooklyn in 1992 with a woman he has described as a good friend, Mr. Adams said he had already answered questions on the subject. He has previously said he gave his shares in the co-op to the woman, Sylvia Cowan.

Ms. Cowan, in a text message to The New York Times on Friday, said Mr. Adams “transferred all of his shares” to her in March 2007. But an email that Ms. Cowan sent to the co-op’s board in May, which The Times obtained, suggests that Mr. Adams still owned his shares in the unit as recently as last month.

When asked about his residency and his finances, Mr. Adams called the criticism of him “desperate attempts” by his opponents.

“I’m so finished with all that,” he said.