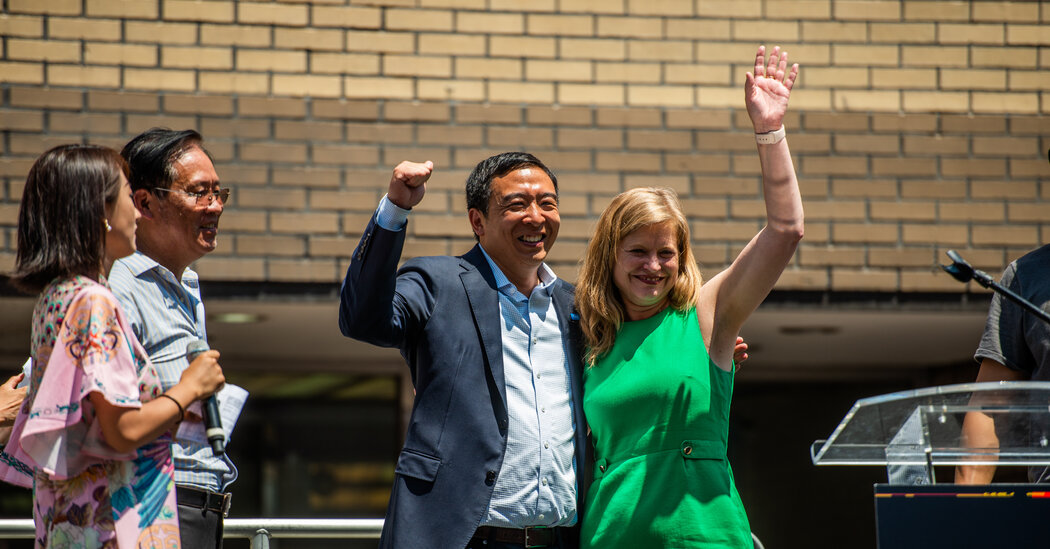 On the last day of early voting before Tuesday’s primary in New York City, the eight leading Democratic candidates sprinted across the boroughs on Sunday, stopping at the usual rally points like churches, parks and barbecues, as they tried to lure more voters.

They braved temperatures that hit almost 90 degrees, and canceled Father’s Day plans, to shake hands and even hula hoop with supporters.

Here are five takeaways that stood out from the final weekend of campaigning.

Garcia and Yang team up, but avoid endorsements

Kathryn Garcia and Andrew Yang appeared together in Chinatown, marking the second time in just as many days that the pair came together on the campaign trail. That earned the ire of front-runner Eric Adams. (More on that later.)

Mr. Yang has encouraged his supporters to mark Ms. Garcia as their second choice on the ranked-choice ballots.

Garcia isn’t returning the favor. She’s praised Mr. Yang, but she isn’t explicitly asking her supporters to cast a vote for Mr. Yang.

The show of unity from two of the strongest candidates underscored how ranked-choice voting has complicated the mayor’s race and how rival candidates can band together in a ranked-choice election to stem the momentum of a front-runner. In this case, Mr. Adams, the Brooklyn borough president.

That alliance isn’t going unnoticed. Prominent Black leaders, including Representative Gregory W. Meeks of Queens, have echoed comments by Mr. Adams that the alliance is a an attempt at diluting the voice of Black voters.

Mr. Adams has said that the show of unity is an attempt to prevent “a person of color” — specifically a Black or Latino person — from becoming mayor. H. Carl McCall, the former state comptroller, has also criticized the move, likening it to voter suppression. Both men have said they will rank Mr. Adams either first or second on their ballots.

Mr. Yang dismissed the accusation that his alliance with Ms. Garcia was divisive. Maya Wiley disagreed with Mr. Adams that the partnership is intended to weaken the Black vote, saying candidates are going to strategize differently about ranked-choice voting.

“I will never play the race card lightly unless I see racism, and I’m not calling this racism,” Ms. Wiley said

Mr. Adams has never been a fan of ranked-choice voting, which allows voters to select their top five candidates. Now, he is raising questions about how the Board of Elections plans to release results as his campaign faces growing efforts from opponents to slow his momentum.

Mr. Adams, who has declined to say who he would list as No. 2, has said the Board of Elections should not release any results until it has the final tally. The city plans to start releasing partial and unofficial vote totals on Tuesday night, after polls close. And then they will periodically update the tallies until a final count on July 12.

If no candidate gets the 50 percent plus one vote required for victory on primary night, the ranked-choice voting tabulation process will begin.

Adams disagrees with the process but said he will not fight it. “These are the rules. We have to play by the rules,” he said. “We are going to tell our supporters and voters let’s remain patient.”

New Yorkers didn’t rush to polling sites on Sunday, the last day of early voting. Instead parks and beaches and restaurants and bars were packed across the five boroughs as temperatures almost hit 90 degrees Fahrenheit.

That was a reversal from last year when more than a million people waited hours in lines that stretched blocks to vote in November’s presidential election. This time, there were barely any lines, and waits of just 20 minutes at the most congested polling sites.

Candidates make it a family affair

Neither the heat nor Father’s Day could keep candidates off the campaign trail on Sunday, with some turning their final pitches to voters into a family affair.

Scott Stringer, a top contender early on whose candidacy was derailed by allegations of sexual assault, brought his wife and two sons to canvas on the Lower East Side of Manhattan. Both sons were handing out pamphlets and wearing Team Stringer T-shirts.

“I wouldn’t have it any other way,” Mr. Stringer said of his Father’s Day.

And New Yorkers across the city celebrated Father’s Day with their families, many still carefully considering how they will cast their votes on Tuesday.