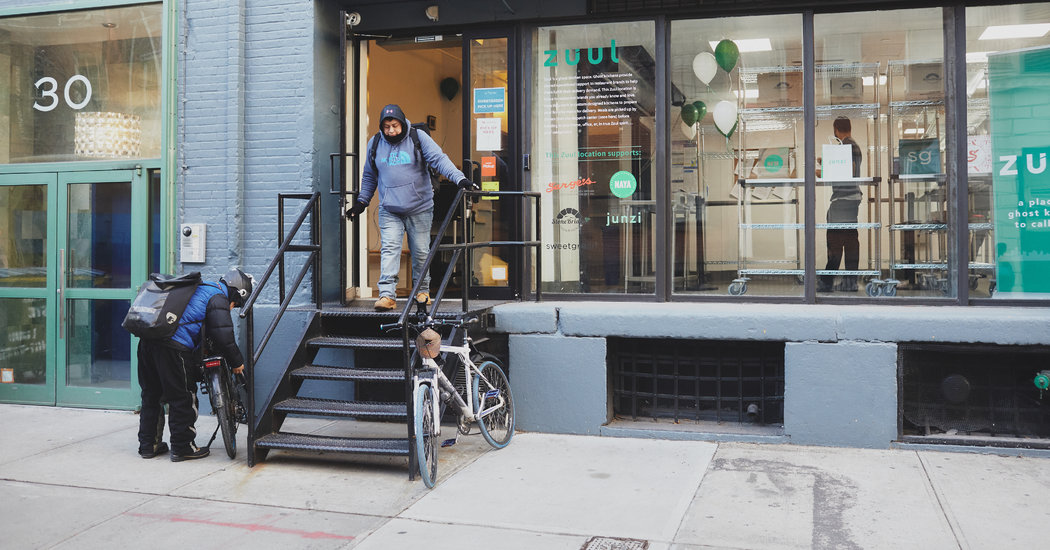 New York City is the country’s largest market for food delivery, and demand is only growing.

So while you may look at the city and see skyscrapers and randomly dispersed piles of trash, venture capitalists see a realm of monetary potential, where efficient systems like those created by food delivery apps could be shuffled: more players added, more capital derived.

A means through which investors stand to make more money from food delivery has manifested in the city and will multiply in 2020.

The means is a type of business called a ghost kitchen. These are food establishments, usually fast-casual, that make meals that can be purchased exclusively with a delivery app like Seamless, Grubhub, DoorDash or Uber Eats. Ghost kitchens can house extensions of existing restaurants or new brands.

But customers cannot order takeout, and they cannot eat in a restaurant attached to the kitchen.

The moneymaking part is in the bundling: Several ghost kitchens can exist within the same physical kitchen, sharing ingredients and equipment and cooking staff used to supply multiple restaurant brands. (In practice, this means that a customer can order Indian food, burgers or falafel, all from different restaurants, but the food is all coming from the same address.)

Ghost kitchens are popping up around Europe and in West Coast cities. In New York their physical presence may go unheralded: just another anonymous building, closed to passers-by, perhaps where a restaurant used to be.

Ghost kitchens come with a dose of big tech energy in the form of some marquee names: Travis Kalanick, the former chief executive of Uber, has been working on CloudKitchens, a ghost kitchens start-up.

Mr. Kalanick has been quiet in the press about the project; he did not respond to a request for comment. Saudi Arabia’s sovereign-wealth fund, a major Uber backer, has reportedly invested $400 million in the new company.

And Reef Technology, a start-up in Miami that counts ghost kitchens among the several businesses it operates, attracted funding from SoftBank, which helped bankroll Uber and WeWork.

Reef is already operating two kitchens in New York. They look like food carts, but, of course, a person without a smartphone cannot order food from them.

That’s why, Mr. Collins said, delivery caught on in New York, so consumers would not have to “go brave the streets themselves.”

Mr. Collins said that while many ghost kitchen companies essentially scout cheap real estate that they can carve up to make numerous tiny kitchens, Kitchen United looks for spaces near “really high concentrations of people and retail.” His company does not want to be more than two or three blocks from the center of things.

Zuul Kitchens, another ghost kitchen company, opened a facility in Lower Manhattan in September. The space is divided between six restaurant brands including established names like Sweetgreen, Junzi (a fast casual Chinese brand) and Stone Bridge Pizza and Salad (a fast casual pizza and salad brand).

Restaurants like Stone Bridge can seem as if they were dreamed up to exist in such spaces. Enrique Mendez, a founder of Stone Bridge Pizza, described the concept as “fast casual pizzas made to order, artisanal, all farm to table.” He added: “We have a sustainable farm in upstate New York. Hydroponics.” Mr. Mendez previously worked in finance.

On a visit in November, Corey Manicone, a founder and the chief executive of Zuul, gave a tour of the ghost kitchen facility, remarking on the “multiple points of egress” (ways to leave the building). He referred to food as “product.” Though he did not share the specifics of what he called his “product road map” (business plan), he said that Zuul should have a handful of similar kitchens open by the end of 2020.

Eventually, Mr. Manicone thinks, restaurants will need only one or two flagship locations in a single market. “And then you’re going to see appendages that are Zuuls throughout the surrounding areas,” he said. “Have a Zuul in every neighborhood.”

Mr. Manicone was somewhat cagey about Zuul’s relationship with the delivery companies that it relies upon to transport the food its restaurants produce. That may be because some delivery companies, including DoorDash, have created ghost kitchens of their own.

Asked if he was worried that the delivery companies may engage in tactics that would encroach on businesses like Zuul he said, “Hmm. No. Maybe.”

There is a lot of potential value in vertical integration especially for a logistics company like DoorDash, said Fuad Hannon, the company’s head of new business verticals. A ghost kitchen would help the company control things end to end.

To that end, DoorDash has debuted one in Redwood City, Calif. (DoorDash would not comment on whether it plans to open a ghost kitchen in New York.)

Not all the delivery companies are getting into the ghost kitchen game. Padma Rao, the vice president of special projects at Grubhub, said: “We are not in the real estate business.”

Delivery-only kitchens are not new to New York City. A start-up called Maple tried a similar business model in 2015, in which it produced its own food. Costs were high. It shut down in 2017. The facility that once housed Maple is now leased by Zuul.

David Chang, the restaurant operator behind Momofuku, was a key investor in Maple. He believes that eventually a delivery business will build out, or combine with, a ghost kitchen concept (what DoorDash has done in Redwood City, at scale) and change the world. But he could not tell you when.

In an interview, Mr. Chang stressed one of his familiar ideas: that the technology world and the culinary world speak different languages, and that until someone figures out how to bridge that gap, a full-scale vertically integrated delivery business is not going to succeed on the level of a tech giant like Amazon or Google.

“For the time being you still need humans to make food and to process it,” he said. “It’s not like being at a warehouse at Amazon where you’re taking something out of a box and putting it into a bag.”

The creators of ghost kitchens think the concept represents the inexorable logic of the market, a further optimization of an already-efficient system. But it remains unclear how ghost kitchens may affect people and employment. They could mean fewer well-paying jobs.

Even Mr. Chang, who expects at some point to be in business with a company that can figure out the business model, said that he had some issues with the sustainability of ghost kitchens.

“Not for the business,” he clarified. “I’m more concerned from a restaurant operator’s perspective. Is it really freedom or is it more servitude?”

“The mom-and-pops, the bricks-and-mortars, may not be able to stand up to these cloud kitchens,” said Mireya Loza, a professor of food studies at New York University. “My question is where are people who actually come from different backgrounds, where will they have to interact?”

Fast-food restaurants, for instance, have become gathering places for people who lack public spaces in which to spend time. Marcia Chatelain, a professor at Georgetown University and the author of “Franchise: The Golden Arches in Black America,” pointed out that McDonald’s, for example, had become a hub for various types of civic activity, from voter registration to the daily ritual of senior citizens communing over coffee.

“I think this structure of putting the preparation of food behind closed doors, it really disadvantages people who need the brick-and-mortar experience — or who really need to access the internet, warm up between shifts at a job, have a meeting point for them and their kids,” Dr. Chatelain said of ghost kitchens.

On the other hand, according to Callum Cant, the author of “Riding for Deliveroo: Resistance in the New Economy,” about his time as a delivery worker when ghost kitchens were introduced in Britain, they quickly became hubs for worker organization.

“In Nottingham, ghost kitchens were really useful,” Mr. Cant said. “You could chat to each other whilst you were there.”

That assumes that the ghost kitchen model wouldn’t eventually just eliminate the human element on the delivery side entirely. While Mr. Cant is skeptical of that logistically, he is familiar enough with the industry to know that the owners of the companies are hoping at some point to fully automate both production and delivery of food.

Mr. Chang is also familiar with those kinds of plans.

“The thing that might change this whole equation is when everything gets automated,” he said. “That’s when I think, personally, tech people will feel like: We don’t have to worry about this perfect balance with food. We’re just going to have computers make it.”