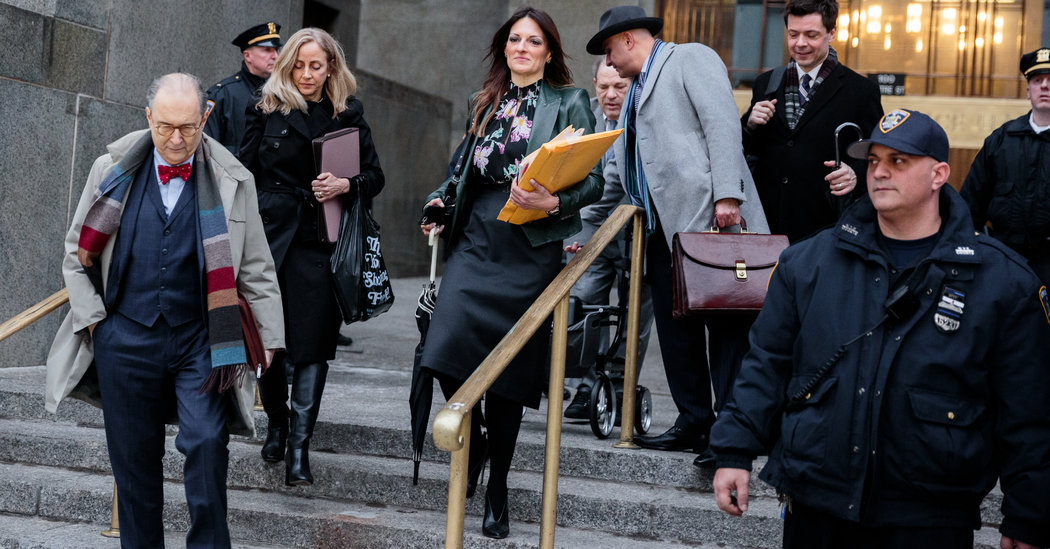 Over the weekend, just days before jurors in the Harvey Weinstein case were set to begin deliberations, his lead defense lawyer, Donna Rotunno, wrote an opinion piece imploring them “to do what they know is right.”

The judge ordered the defense team not to speak to the news media until after a verdict is reached.

“Defense team you are ordered to refrain from communicating with the press until there is a verdict in the case,” Justice James M. Burke told Mr. Weinstein’s lawyers. “I would caution you about the tentacles of your public relations juggernaut.”

The jurors were not in the courtroom at the time. As in many high-profile cases, jurors have been reminded every day by the judge not to follow any news media coverage of the case.

The judge’s order came just before he gave the jury final instructions. The panel of seven men and five women began deliberating at 11:30 a.m.

A half-hour later, the jurors sent a note to the judge asking for definitions of legal terms like consent and forcible compulsion, as well as written definitions of the charges against Mr. Weinstein and whether they could find him guilty of certain combinations of charges.

The main charges in the indictment rest on the testimony of two women: Miriam Haley, a former production assistant who said the producer forced oral sex on her at his home in 2006, and Jessica Mann, a former actress who accused him of raping her in a Midtown Manhattan hotel in 2013.

But prosecutors are also using the testimony of the actress Annabella Sciorra, who said Mr. Weinstein raped her in the early 1990s, to bolster the charge that he is a sexual predator, even though the alleged attack is too old to be charged as a separate crime.

In their first note, the jurors also asked for an explanation about why the statute of limitations prevented a conviction based solely on Ms. Sciorra’s account. Her testimony was pivotal because if the jury finds her credible and also finds Mr. Weinstein guilty of sexually assaulting Ms. Haley or Ms. Mann, he can be found guilty of predatory sexual assault, which carries a life sentence.

To demonstrate a pattern of abuse, three other women were allowed to testify about their accusations that Mr. Weinstein sexually assaulted them. But he is not charged with crimes in those cases.

Shortly after 3 p.m., the jurors sent out a second note requesting the layout of Mr. Weinstein’s Manhattan loft, suggesting they were reviewing Ms. Haley’s allegation that the producer forced her to let him perform oral sex on her there in 2006. The jury also requested three emails in which Mr. Weinstein had listed people — he called them “red flags” — he wanted an Israeli intelligence firm, Black Cube, to investigate. Ms. Sciorra was on that list.

The argument in the morning was the third time the prosecution had called Ms. Rotunno’s public comments into question since the trial began with jury selection on Jan. 6.

Last month, prosecutors requested a gag order after Ms. Rotunno criticized Mr. Weinstein’s accusers in interviews with reporters. They made the same complaint after she participated in a New York Times podcast, in which she said, among other things, that she had never been sexually assaulted “because I would never put myself in that position.”

Prosecutors said Ms. Rotunno had also, in The Times’s podcast, called the accusers liars who were seeking fame. At the time, the judge warned the defense not to talk about the witnesses.

On Sunday, Ms. Rotunno took a new approach, addressing the jury of seven men and five women directly in her 284-word opinion piece in Newsweek.

“I implore the members of this jury to do what they know is right and was expected of them from the moment they were called upon to serve their civic duty in a court of law,” she wrote.

“The facts are the facts. Harvey Weinstein is innocent,” she went on. “His fate hangs in the balance, and the world is watching.”

Ms. Illuzzi, who read an excerpt from Ms. Rotunno’s essay, asked Justice Burke to order that Mr. Weinstein be held in custody during the jury deliberations. She suggested that the film producer was behind the decision to make a last-minute appeal to the jury through Newsweek.

“It is 100 percent inappropriate behavior,” Ms. Illuzzi said. “No way Ms. Rotunno did this without the prompting and encouragement and the knowledge and the permission of this defendant. It cannot be allowed in this courtroom or any courtroom in the country.”

Ms. Rotunno told the judge that she was seeking to counter the prosecution’s narrative that Mr. Weinstein is a predator.

“It is one small piece of a large media attack on Mr. Weinstein every single day and for the D.A.’s office to act like they don’t talk to the media just because their name isn’t in the article is ridiculous,” Ms. Rotunno said. “I did not say anything beyond the bounds of what our system should do.”