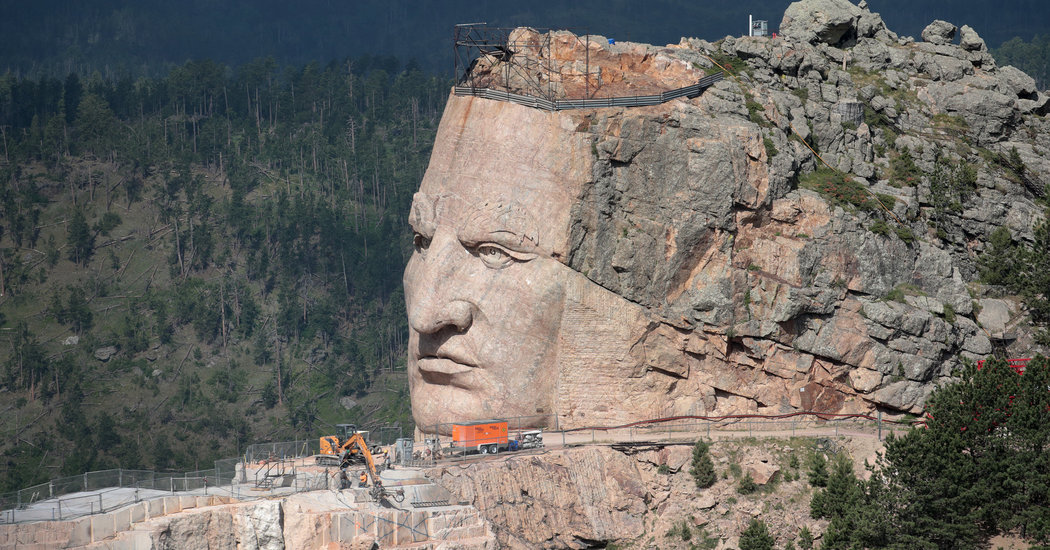 As baffling as it is to find statues of traitors, slaveholders and killers of Union soldiers ensconced in many a prominent square, consider the historical discordance of Custer County, S.D.

The hard beauty of the Black Hills, sacred land to Native Americans, overshadows the county, the main town and the state park, all named for George Armstrong Custer. The hard history was shaped by the slayer of those native people. Custer’s willful trespass into territory promised by treaty to the Sioux set the stage for the last violent encounters between New World and Old.

Just under 20 miles from Custer is Mount Rushmore, which President Trump plans to visit this Fourth of July weekend. A mere seven miles from Custer is the Native American Rushmore — a still unfinished carving of the Oglala Sioux leader Crazy Horse, 641 feet long and 563 feet high.

Here is the American paradox in a grid of stark geology.

No country can last long without a shared narrative. You wonder, on an Independence Day when the mood of the country is more angry and fearful than it’s been in a long time, if this nation can ever have such a thing again.

I think we can. But to make that happen, it will take an imaginative projection of the best instincts of those four imperfect men whose visages are chiseled into stone, as well as the Sioux warrior honored just down the road.

Before we get to them, let’s talk about him. Trump wants a fireworks display in the pine forest around Rushmore in the middle of fire season. There will be no required social distancing for the crowd. And the world’s most powerful narcissist will be projecting his dream to have his face carved next to those of George Washington, Thomas Jefferson, Abraham Lincoln and Theodore Roosevelt.

There you have it — everything that is so awful about him in one appearance, putting the lives of American citizens and a national landmark at risk to protect his eggshell ego.

But what about them? Rushmore was created by Gutzon Borglum, a confidant of leaders of the revitalized 20th-century Ku Klux Klan. Before Borglum took his jackhammers to the Black Hills, he had started work on the largest shrine to white supremacy in the world — the bas-relief sculpture of Confederate leaders in Stone Mountain, Ga.

Still, few people think of Borglum when they gaze up at the four presidents. Instead, the visitor is prompted to think of what those men did for a fragile democracy.

Most revolutions don’t end well. From the kindling of the Enlightenment, France was consumed by a wildfire of fratricide and state-sanctioned beheadings in the late 18th century. Russia’s 1917 revolt eventually led to an epic of mass murder rivaled by Hitler’s Holocaust. And the Irish finally threw off centuries of British rule only to plunge into a bloody civil war in the 1920s over the terms of that independence.

The American Revolution, birthed in part by the looting of British merchant ships in Boston Harbor, was the exception, until our own Civil War over the Original Sin that had been ignored in the founding documents. The protests of 2020 are a legacy of rage dating to 1619.

Each of the Rushmore presidents furthered the ennobling sentiments of men who tried to fashion a democracy from a revolution. Some may never forgive Washington for his slave ownership. But among the nine presidents who owned slaves, only Washington freed them all in his final will.

He also kept the United States from becoming a monarchy when the Trumpians of the day wanted to make him king.

Jefferson was a slaveholding racist who wrote “all men are created equal” in the Declaration of Independence. The words outlive, and outshine, the man.

Lincoln needs no defense, except to say that those who want to destroy his statues now should read Frederick Douglass’s nuanced take. Lincoln fought the anti-immigrant Know-Nothings, the Trumpians of his day, and ensured that the radical truths of Jefferson would apply to four million formerly enslaved people.

Teddy Roosevelt was no friend of the continent’s original inhabitants. But he evolved. His Rough Riders were multiracial warriors. And as the 20th century’s most influential progressive president, he invited Booker T. Washington to dine with him, the first time any president had broken bread with a Black man at the White House. This, at a time when it was difficult for a Black man to get a meal in a restaurant.

Each of them pushed the revolution closer to an ideal of true equality. And Roosevelt was the first to add universal health care among the truths we hold self-evident.

You can honor the work they started, and desperately needs to be finished, by ignoring Trump’s ahistoric histrionics this weekend and watching “Hamilton,” which is streaming to many parts of the world starting Friday. This founder was an “orphan, son of a whore,” Washington’s better half, and in the person of Lin-Manuel Miranda, he’s a face of the American tomorrow.

At the core of the musical is the founding — reimagined, re-mythologized, rough-edged. A mess of contradictions, like this nation on its 244th birthday.

Timothy Egan (@nytegan) is a contributing opinion writer who covers the environment, the American West and politics. He is a winner of the National Book Award and the author, most recently, of “A Pilgrimage to Eternity.”