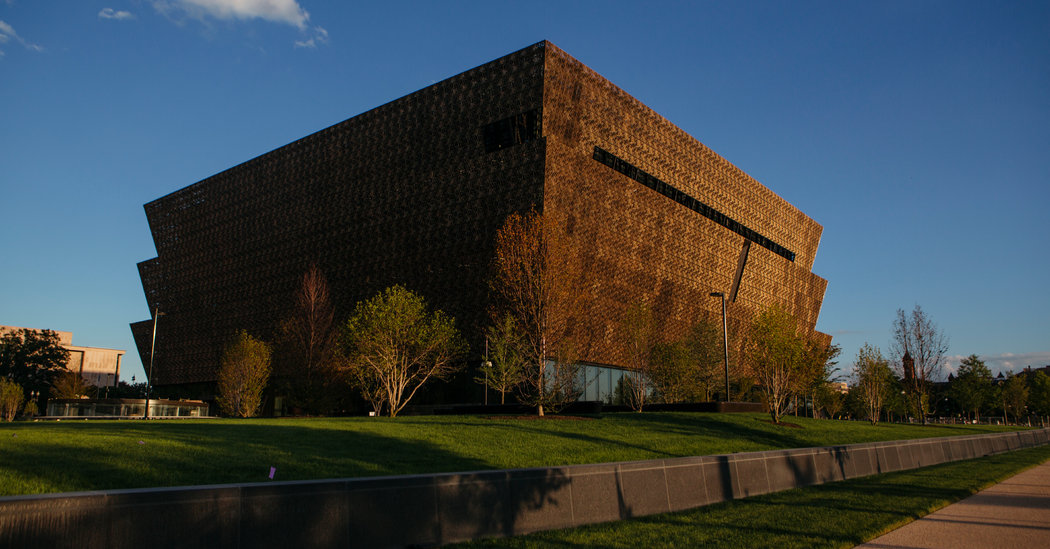 I was passing by the Smithsonian’s National Museum of African American History and Culture in Washington the other afternoon when the raking winter sun made the patterned, bronzed-aluminum facade glow. The building seemed to warm its patch of a frozen National Mall, alongside the chilly phalanx of gray stone behemoths, nearly all classically designed.

Style-wise, I don’t know what to call the museum’s architecture. David Adjaye, the Ghanaian-British architect, led the design team. The building is classicizing, with its base and capital, at the same time that those patterns on the facade borrow from ironwork by Southern slaves, and the facade’s canted, three-tiered structure derives from West African sculptural traditions.

The design is a kind of meditation on the symbolic meanings of American classicism and how style functions as a symbol of pride, or a tool of oppression and colonialism, from which modernism, with its transparent glass and technical innovation, promised escape and liberation. Architecturally speaking, the museum is many things, in other words, not to mention it is mobbed all the time — hands down the most popular and successful new public building in Washington this century.

The Trump administration is now considering a draft executive order, “Making Federal Buildings Beautiful Again,” that would direct the use of traditional or classical architectural styles for nearly all new federal buildings and renovations. (The Smithsonian, as it happens, gets a pass, but I mention it to illustrate the sort of wellspring of ideas the order would subvert.) Any project seeking exemption from the mandate would have to get approval from a presidential “re-beautification” committee. The order would take aim at various forms of modernism and seeks to undo the widely admired Design Excellence Program of the General Services Administration, a peer review system for selecting qualified architects for federal projects. The program’s director, David Insinga, resigned last week, according to the Architectural Record, which broke the news about the order.

The news prompted strong protests from within the architectural profession and among historic preservationists and supporters of traditional architecture as well.

That’s because it almost seems conceived to provoke supporters of both modern architecture and architectural diversity. It’s a shiny object, Twitter bait. The populists versus the elites. Outrage enraptures President Trump’s base. It’s a win-win for him.

It’s probably not a win for proponents of the order like the National Civic Art Society, which spearheaded it. I have heard from organizations that support classical architecture but want to distance themselves from the proposal, its related politics and the Civic Art Society. The National Trust for Historic Preservation issued a statement Thursday in support of current federal standards, saying, “The draft order would put at risk federal buildings across the country that represent our full American story,” and adding, “We strongly oppose any effort to impose a narrow set of styles for future federal projects based on the architectural tastes of a few individuals.”

Who knows what classicism ultimately means, but the draft order makes it come across as awfully prim and petty. No matter how much its supporters say that enforcement wouldn’t be dogmatic, the order provokes inevitable allusions to authoritarian regimes of the past that imposed their own architectural marching orders, and dredges up images of antebellum America, when classicizing Federal architecture was all the rage. Associations like these might sound extreme; but then, so does the order.

Just to have this argument feels demeaning, like so much else about American public discourse today. Shouldn’t it go without saying that the United States has long exercised its soft power by building embassies and other buildings whose architectural nonconformity conveys an expedient message of optimism, innovation and freedom?

“Our ability to compete effectively in international markets depends largely on an often overlooked but integral element — design quality,” is the way President Ronald Reagan put it in 1987 when he announced a second round of federal awards for design excellence, a forerunner of the Design Excellence program that the proposed order aims to quash.

And does one really need to point out why it’s so rich of those who argue for states’ rights to argue against site-specific architecture, stylistically conceived to suit America’s diverse cultures, and instead favor obedience to a mandate from Washington? Or to explain that disagreements about architectural style speak to a healthy, democratic society in action? After all, there is no single style of architecture that represents nationhood — or that does not, and should not, provoke debate.

The executive order borrows language from the “Guiding Principles for Federal Architecture” that Daniel Patrick Moynihan wrote in 1962 when the future senator was working in Kennedy’s Labor Department. Moynihan believed that federal architecture “must provide visual testimony to the dignity, enterprise, vigor and stability of the American government.” The new proposal also refers to dignity, enterprise, vigor and stability.

But it undoes the key principles on which, as Moynihan made clear, those goals depend — that design must “flow from the architectural profession to the government, and not vice versa,” because expertise matters, and that “an official style must be avoided.”

In the current political climate, it can feel useless to bring up the issue of hypocrisy, so let’s leave Mr. Trump’s own modern glass towers aside. The draft order praises the Washington building now known as the Eisenhower Executive Office Building as “beautiful and beloved.” Harry Truman called it the “greatest monstrosity in America.” Suffice it to say that taste changes and style, by definition, is the most superficial criterion for evaluating architecture.

Buildings, like people, deserve to be regarded and judged individually. Context matters. Failure happens sometimes, as with anything meaningful in life. Adding Corinthian columns or Palladian windows to a federal courthouse or embassy guarantees nothing about whether a building works for the people who use it, nor does it testify to the dignity, enterprise and vigor of the American government. I can’t begin to list all the traditional buildings in America that I find uplifting and beautiful. But Greek columns and Italianate windows don’t make a building look more American to me.

The trap is falling into a debate over taste or style. It’s the sort of cultural divider this president loves to cultivate and exploit. Like most people, I can come up with a list of modern buildings I don’t like. But if I say I admire Mies van der Rohe’s Chicago Federal Center or Thomas Phifer’s United States Courthouse in Salt Lake City or the Oklahoma City Federal Building by Ross Barney, it would only serve as ammunition for the haters in the Twittersphere and for proponents of “Make Federal Buildings Beautiful Again,” who are basically arguing that federal architecture, like the Electoral College, doesn’t actually have to represent all the people, just select people.

In the end, we are what we build. In case anybody hasn’t noticed, the country’s infrastructure is in shambles, there’s a vast affordable housing shortage and the federal government continues to squander years doing nothing.

This seems as surely an indicator of the state of the union as the number of columns on a courthouse facade.