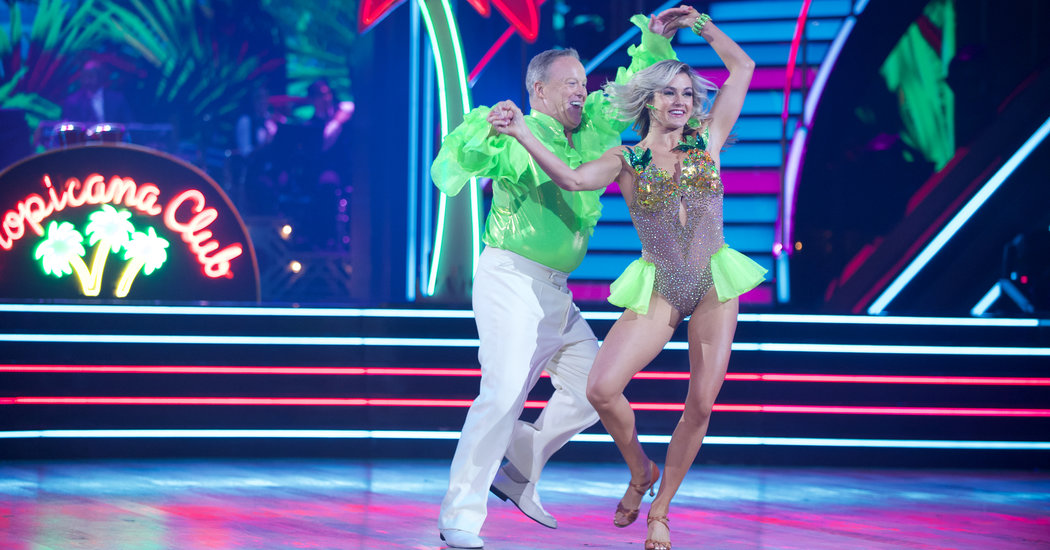 On Monday night, Sean Spicer yet again collected enough audience votes to be deemed safe on ABC’s “Dancing With the Stars.” Kate Flannery was voted off. What’s terrible about this week’s results is that the competition included a dance-off; Mr. Spicer went up against Ms. Flannery. She won, according to the judges. But Mr. Spicer remains, and it’s outrageous.

He had a different partner this week because his regular one, Lindsay Arnold, had a death in her family. It didn’t make his dancing better or worse. It remains consistent in its awfulness.

Mr. Spicer’s staying power has little to do with his performances. Over the past eight weeks, he has been the weakest dancer on the show. His low scores from the judges have borne that out.

Bad dancing by a nonprofessional can be disarming. It allows you to see the truth within the body that reveals character. But Mr. Spicer, the former White House press secretary and communications director for President Trump, is something worse: an untruthful dancer.

The creation of a dancer takes years — around 10, as the great modern choreographer Martha Graham explained in her autobiography, “Blood Memory” (1991). The movement of a trained dancer, she wrote, “becomes clean, precise, eloquent, truthful. Movement never lies. It is a barometer telling the state of the soul’s weather to all who can read it.”

Mr. Spicer isn’t trained, of course, but he has revealed much about his soul’s weather through his dancing. He hides behind an egregious smile, parting his teeth to make it look as though he’s been caught mid-laugh. That smile seems meant to distract from his plan of attack: never actually performing a dance, but conquering it.

And so he set out to campaign, creating the website spicerarnold.com, where you can purchase mugs and hats or a set of two yard signs for $20. “Let’s stand up for people who can’t dance!” he yelled through a megaphone on the streets of Los Angeles in Week 2.

This seemed to exasperate his partner, Ms. Arnold. “I am loving seeing Sean getting votes for the show,” she said in a segment, “but at the same time, this is a dance competition.” Mr. Spicer needed to be somewhere else: in the studio.

When interlopers invade a dancer’s world, as contestants have on “Dancing With the Stars” since 2005, it reveals much — about their psyche, their strengths and weaknesses, their essence as human beings. Are they generous? Lazy? Thoughtless? The truth comes out in the dancing.

As for Mr. Spicer, he’s as stiff and two-dimensional as a sheet of cardboard, with feet that move as if stuck in slabs of cement and arms that look like they’re still gripping the lectern. And while he acts as if he liked dancing — like he just wanted to have fun — all the “Saturday Night Fever” disco suits in the world can’t hide how much he seems to hate it, but knows he must endure it.

Watching Mr. Spicer try to wipe away some of his disgrace through dancing hurts. Yet here he is, week after week, using dance as a way to redeem his character. Giving the public the chance to laugh with him — dressed as a buffoon in that scary green ruffled shirt, dancing to “Spice Up Your Life” — and not at him comes off as a calculation, on his (and probably the show’s) part. And Mr. Spicer’s later performances have been scary in a different way, like his militaristic Paso Doble, which had a cold brutality to it.

The audience vote happens live during the broadcast, starting at 8 p.m. Eastern time. Viewers in other time zones might not see the entire show or any of it, but they can still vote. At the end of each program, the judges, Carrie Ann Inaba, Len Goodman and Bruno Tonioli, decide which of the bottom two couples goes home. Remarkably, Mr. Spicer has never been in the bottom two.

The audience votes that he has amassed tell us a thing or two about who’s watching the show and helping to decide the outcome. (President Trump got in the act, too. In a tweet on Oct. 14, he encouraged people to vote for Mr. Spicer: “He has always been there for us!”)

When, in Week 2, voters decided to kick off the former Supreme Mary Wilson — a black grandmother who possesses an undeniable theatrical presence (“the glamour!” Mr. Tonioli said) — instead of Mr. Spicer, it was heartbreaking. It also seemed sexist and ageist.

And in the early weeks, it was striking that the majority of the dancers whose votes put them at the bottom of the pack were black. Along with Ms. Wilson were Ray Lewis (who pulled out because of an injury), Lamar Odom and Karamo Brown. While it’s true that Mr. Odom is an awkward dancer — he had a hard time remembering steps — his performances were endearing. He tried so hard. Whenever it came time for him to perform a step he liked and remembered, he lit up.

And Mr. Brown, who was voted off in Week 7, was clearly in another category: He can dance and he got better each week. He was determined to.

On Week 6, Mr. Spicer was safe again, but my favorite dancer, Sailor Brinkley-Cook, was voted off. Her bubbly exuberance allowed her to throw herself into every dance she performed despite being wracked with insecurity. Her nerves could really fray.

When she lost, she sobbed real tears, the messy kind. For me, she was the greatest surprise, both as a dancer and as a contestant on a competition show. She cared and she danced her heart out.

This is what Graham meant when she said movement doesn’t lie.