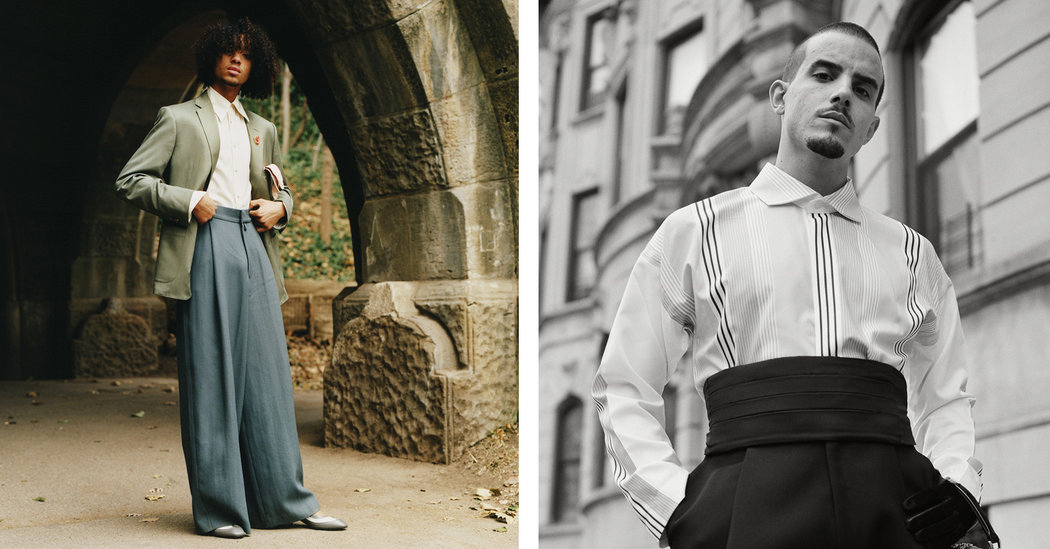 Murderous knife fights, attempted gang rape, malicious slurs: These were not common motifs of musical theater when “West Side Story” first premiered on Broadway in 1957. That production — a retelling of Shakespeare’s “Romeo and Juliet” — was praised by the theater critic Brooks Atkinson in The New York Times as a “profoundly moving show that is as ugly as the city jungles.” Its story, set over the course of 48 hours on the streets of 1950s Manhattan, pits the Jets (a gang of white teenagers) against the Sharks (a gang of Puerto Rican teenagers), their abiding contempt for one another born from the country’s deep-seated racism; when Tony (a Jet) falls for Maria (a Shark), bloodshed ensues. “West Side Story” is, at its core, a tale of forbidden love and insatiable enmity — and starting this month, it returns to Broadway for the sixth time, in a revival directed by the Belgian theater provocateur Ivo van Hove.

While van Hove, 61, is no stranger to New York’s theater scene — nor to adapting American classics, having remounted Arthur Miller’s “A View From the Bridge” in 2015 and Miller’s “The Crucible” in 2016 — this is his Broadway musical debut. The original production was a collaboration of four prolific minds: the composer Leonard Bernstein, the lyricist Stephen Sondheim, the playwright Arthur Laurents and the choreographer Jerome Robbins, the show’s director, whose memorable style — the iconic snapping, the fusion of ballet, jazz and mambo — earned him a Tony Award for best choreography and inspired a generation’s worth of would-be dancers. From the start, “West Side Story” was Robbins’s brainchild, and with each Broadway revival, his choreography has remained unchanged — until now. Van Hove, set on modernizing the show, has completely done away with it, debuting in its place new work by the avant-garde, 59-year-old Belgian choreographer Anne Teresa De Keersmaeker, whose 1983 “Rosas Danst Rosas” (which included four female dancers on chairs performing deceptively simple, repetitive movements) first put her on the international map. Known for her minimalist approach to dance — as seen recently in “The Six Brandenburg Concertos” (2018) at the Park Avenue Armory in New York — De Keersmaeker “distills movement to its purest form,” says Daniel Ching, who stars in this production as Snowboy, a Jet.

This is far from the revival’s only departure: Whittling the production down to an intermission-free run time of an hour and 45 minutes, van Hove has cut the “Somewhere” ballet along with “I Feel Pretty” (though adored by audiences, Sondheim has said that the song embarrasses him: “I have blushed ever since” writing it, he admitted in 2010’s “Finishing the Hat”). Van Hove will also incorporate a spare set as well as live and prerecorded video, both trademark techniques of his work, the latter seen most recently in his 2018 theatrical adaptation of the 1976 film “Network.” But van Hove’s most moving choice is his completely multiracial casting: As Isaac Powell, who plays Tony, tells me, Laurents was never explicit about the Jets having to be white, as they are usually depicted; instead, the script describes them as “an anthology of what it means to be American.” So in this version, the cast is more diverse than ever, with members of each gang appearing as though they could belong to either — or as though they are all, in fact, part of the same. This, too, will be a far more treacherous and violent production: “much darker and much more serious than the original,” says Jacob Guzman, who plays Chino, a Shark. And in that sense, it’s an admonition for America “to realize,” Ching adds, “that we’re more similar than different — before it’s too late.” As the novelist Martha Gellhorn wrote to Bernstein in 1957, after seeing “West Side Story” that year, “Surely this musical tragedy is a warning.” It was then. It remains so now.

In anticipation of the revival of “West Side Story” (preview performances began Dec. 10), T spoke with six of the show’s male actors — three Jets, three Sharks — and styled them for the holiday season in an original digital fashion shoot. These interviews have been edited and condensed.

Stars as: Tony, a former leader of the Jets. Age: 24. From: Greensboro, N.C. Last seen: As Daniel, the love interest in 2018’s revival of “Once on This Island,” his Broadway debut.

How do you think the casting of this revival will resonate with audiences? We’ve only been told “West Side Story” in one way — as white versus Puerto Rican — because for so long “America” was synonymous with “white.” America means something very different today. Why is this an important show to revive now? In this country, we’re very polarized — politically polarized, racially polarized — and we’re all fighting for our perspective to be the right one. Everyone is so identified with their labels and their group — their “gang” — that we forget we’re in this together. What sort of slant does Ivo bring to “West Side Story”? With Ivo, you get a European perspective of America. He watches American politics very closely, so working with him has been really interesting — getting his view on where we are, yet being somewhat removed. Sometimes we’re a little too close to the action to be able to see what we’re doing in this country. What was your first introduction to “West Side Story”? It was the very first show that I auditioned for in community theater in Greensboro, when I was 13, that I did not get into. But now I’m getting to do it!

How would you describe your own style of dance? The style I love is a mix between contemporary and hip-hop, where there’s some flow and movement but still some sharp angles and pops. How is the musical meaningful to you? I’m Puerto Rican, so I grew up watching the movie and idolizing it. It doesn’t have a happy ending, and it shouldn’t, because we’re still dealing with the struggles of race. This story portrays that in a beautiful way through dance, music and song. What’s it been like to work with Ivo? His directing — his vision — is all very real. He’s not like: “Musical theater! We need to put on a show!” He’s like: “This isn’t funny, this isn’t a joke. Your gangs hate each other.”

Stars as: Action, a member of the Jets. Age: 21. From: Brooklyn, N.Y. Last seen: In Netflix’s “Unbreakable Kimmy Schmidt.” This is his Broadway debut.

How would you compare Anne Teresa’s choreography to Jerome Robbins’s? What we’re creating speaks to this modern day — to youth, and to how emotion can be embedded in movement, how you can further the story through that movement and not just have a dance-break pop out. It’s a lot more natural and a lot more magical, which is kind of an oxymoron, but one that makes sense to me. Can you relate to your character, Action, who’s described in the script as “the most aggressive” Jet? I think Action feels like he’s a product of what people before him did: The precedents that have been set by governments and racism and poverty and the war on drugs and slavery — all of that still has an effect on black youth today. It comes very natural to me — his anger and his frustration and his aggression toward authority, especially toward white figures who abuse their privilege and their power.

Stars as: Snowboy, a member of the Jets. Age: 27. From: Honolulu. Last seen: In New York City Center’s 2019 revival of “Working: A Musical.” This is his Broadway debut.

How does this production reflect America today? “West Side Story” represents the melting pot of New York. The original is whites versus Puerto Ricans. But in this production, you don’t just have whites — you have whites, blacks, Asians. I’m half Jewish and half Chinese. So it’s not just majority versus minority, it’s minority against minority, when one minority doesn’t understand another minority’s struggle, which is a complex issue; that’s America today. “West Side Story” deals with issues of masculinity; how are you approaching that? Masculinity has, thankfully, become a lot less one-dimensional. There are a lot of feminine qualities and masculine qualities that a dancer can exhibit no matter their gender. So, I see it almost as an artistic sensibility, as opposed to a social or political one.

Stars as: A member of the Sharks. Age: 18. From: Sunrise, Fla. Last seen: In a student production of “Chicago” at American Heritage high school in Plantation, Fla. This is his Broadway debut.

What dancers or choreographers do you look up to? My ballet instructor [down South], simply because I fought with him for a year. I didn’t want to do ballet — I felt sort of emasculated and embarrassed, even though I shouldn’t have. Once I got past that, I was able to see how much good there was in all of it. How did you hear about the auditions for the revival? Oh, that’s a funny story. I found out about the auditions during history class. My friend texted me, saying, “Hey, there’s an audition for ‘West Side Story’ in two hours at Miami City Ballet.” So I raised my hand and said, “Mr. Shaffer, may I use the restroom?” I called my mom in the bathroom and asked if I could go to the audition. She said: “Yes, absolutely. I’m on my way.” Does “West Side Story” speak to you personally? I’m Dominican and Puerto Rican, and my grandparents came from the Dominican Republic as immigrants. The only reason I’m here is because of them. So when I’m dancing, when I’m acting, singing — I’m channeling my heritage.

Stars as: A member of the Sharks. Age: 23. From: Los Angeles. Last seen: In the dance film “Metatronia (Metatron’s Cube) (2018), directed by Solange. This is his Broadway debut.

What’s your first memory of “West Side Story”? The most vivid thing I can remember is the poster that I bought from going to see the 2009 revival — I had it framed in my bedroom. What dancers or choreographers have influenced you? Vaslav Nijinsky [the early 20th-century Polish ballet dancer]. Me being a queer artist and him being one of the first queer male dancers to perform as a queer person — he’s somebody I’ve always admired. How would you define masculinity in this role? Oh, I don’t think masculinity’s necessarily real. You can play with it, for sure, it’s a form of drag — a form of performance. If I want to play with masculinity one day, I can. If I want to play with femininity, I can. But I can also play with both.