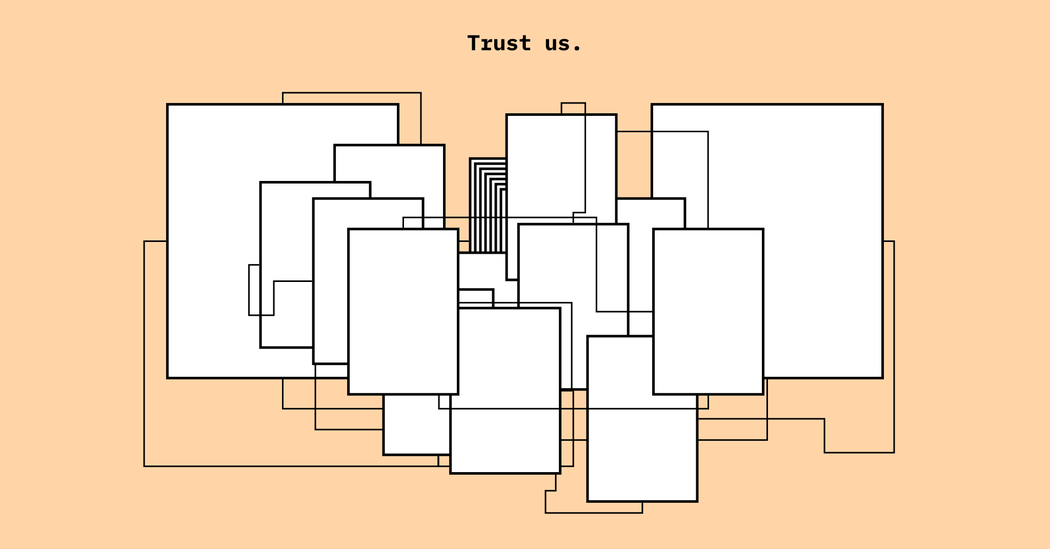 It’s practically an inevitability of the digital world: The middleman eventually becomes a villain.

You might not think of it this way, but middlemen that connect buyers and sellers are everywhere online. The most obvious ones are shopping sites like eBay that gather a bunch of merchants selling dog beds and the people looking to buy Fido a cozy cushion.

Amazon, Uber, Airbnb, Instacart, Expedia, Care.com, Postmates and the app stores from Apple and Google function the same way, at least in part. For a commission that’s typically 15 percent to 30 percent of each sale, these middlemen match buyers like you and me with “sellers” looking to give us a ride, rent us their home, care for our children or sell us a restaurant meal, hotel room or app.

The technology industry loves middlemen companies — the industry calls them two-sided marketplaces. But from the earliest days of the internet, many sellers have hated the middlemen’s guts. I’m not exaggerating when I say that this resentment is the root cause of many conflicts in the digital era.

Restaurants’ grievances with food delivery companies, app developers’ fury at Apple, merchants’ complaints about Amazon, and couriers’ gripes about Uber and Instacart share an underlying problem. The sellers believe a marketplace is charging them too much, making unfair rules, getting rich off their work or all of the above.

And yet it’s not hard to understand the resentment toward a company that delivers you a bunch of business, but also takes a big chunk of your money, sets rules that can seem arbitrary and grows more powerful because of your work.

This conflict feels inevitable. But I recently heard about an alternate marketplace idea that was hard to wrap my brain around but might be a novel way to attack middleman resentment.

That means the work they do will give them both a paycheck and a say over important functions of the marketplace like the size of commissions or whether to pursue big corporate clients. The basic idea, Braintrust’s founder, Adam Jackson, told me, is to give the sellers power and a share of the spoils if the marketplace does well.

I will not bore you with details, but Braintrust works on the concept of a blockchain “token,” an often incomprehensible technology that can promise self-governance among large numbers of people but hasn’t usually worked in practice. Jackson knows this.

The idea of Braintrust is kooky, and it might not work. But I’m glad that people like Jackson are looking for ways the middleman can avoid being hated.

Here is an essential truth about Facebook: Everything it does is intended to suck up as much information about you as possible, so it becomes more capable at selling ads.

Because Facebook tracks everything you say about yourself inside its digital walls, and tracks your activity online and in the real world, the company is armed with so much information that it can find Ford exactly the people who might buy a new pickup.

Facebook is an incredibly successful business in part because of this creepy data harvesting machine. (See also Google, but I’ll leave that for another day.)

That’s why I want you to pay attention to what a German antitrust watchdog is doing. It is saying that limiting Facebook’s data harvesting could address both the company’s data privacy problems and questions about whether the company competes fairly.

Facebook said Germany’s antimonopoly regulator is misapplying the law. The country’s top court sided with the regulator this week, but the case might continue to wind its way through the legal system. I’m certainly not an expert in German laws, and I won’t try to predict the outcome.

But the philosophical idea was a jolt to me. The regulator is treating two major concerns about Facebook — violations of people’s privacy and potential abuses of the company’s power — not as disparate issues but as two sides of the same coin.

Imagine if the Facebook data-sucking machine had more limits? Maybe its ads wouldn’t be as effective and politicians and ice cream companies would have to find other places to pitch what they do.

This video of a curious kitty pawing inside what looks like a piece of cardboard is going wild on TikTok.