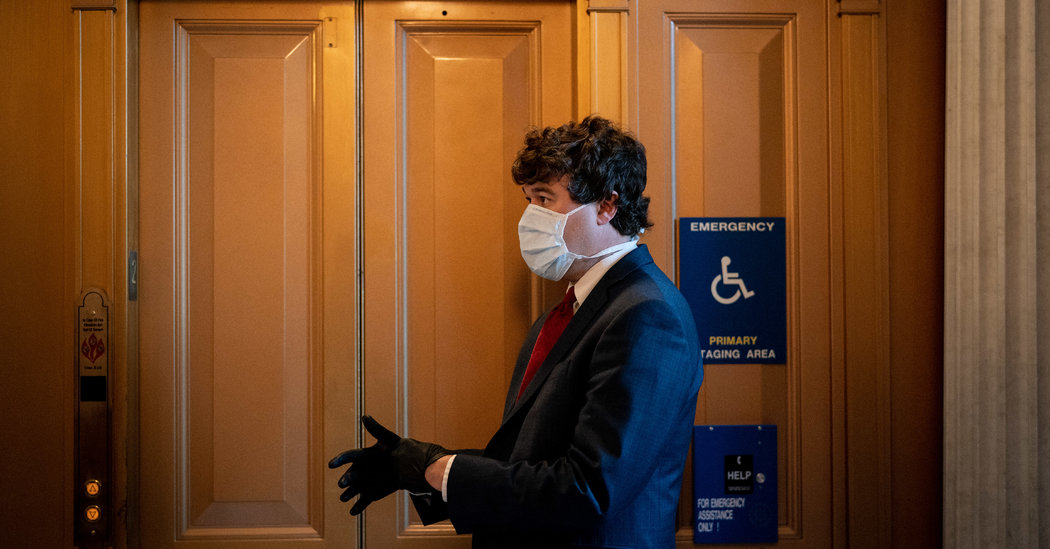 WASHINGTON — Dr. Brian P. Monahan, the tight-lipped doctor who attends to Congress, sent up on Thursday what some have construed as a warning: His office, he told senior Republican officials on a private conference call, cannot screen all 100 senators for the coronavirus when they return to work on Monday.

Two miles down Pennsylvania Avenue at the White House, the story is very different. President Trump and Vice President Mike Pence are tested frequently, aides who come into close contact with them are tested weekly and the list of people who need to be tested daily keeps expanding, according to officials familiar with the process.

The stark contrast between the testing haves at the White House and the have-nots on Capitol Hill makes clear that Mr. Trump’s pronouncement that “anybody that wants a test can get a test,” as he said on March 6 at the Centers for Disease Control and Prevention in Atlanta, is far from true. Although the rich and powerful are clearly favored, not even all the powerful have equal access.

And beyond whether people can be tested, there are questions about the tests available. At the White House, the medical unit is using a rapid-testing kit developed by Abbott, which yields results in about five minutes. But Dr. Monahan told the Republican aides on Thursday that he lacked such equipment, and that it would take at least two days to get test results.

The disparity highlights the fundamental tension between the natural impulse to protect a president’s health and the desire by most politicians to project that they are not receiving any special treatment, Robert Dallek, the presidential historian, said in an interview Friday.

By flaunting his own access to tests and making false claims about the availability of testing, Mr. Trump, he said, was only hurting his own credibility with voters.

“When you add it to the fact that people on Capitol Hill, who after all form an essential part of the government as well, cannot get testing as readily, it just underscores the feeling that this man is principally self-serving,” Mr. Dallek said. “It is not a good impression for the White House to convey.”

The White House appears to agree. Shortly after 11 p.m. Friday, Mr. Trump’s health secretary, Alex M. Azar II, made an announcement on Twitter: “Good news: as the Senate reconvenes to do important work for the American people during this public health crisis, we have now received an initial request and are sending 3 Abbott point of care testing machines and 1,000 tests for their use.”

Whether that will lead to the testing of asymptomatic senators is unclear. Dr. Monahan, a strait-laced Navy rear admiral who has been the attending physician of the Capitol since 2009, has turned down dozens of requests for tests from House members and senators who have not exhibited symptoms, according to a congressional official with knowledge of the matter who spoke on the condition of anonymity to discuss it.

His attitude is by the book: no symptoms, no test, which is in keeping with the C.D.C.’s guidelines for testing. In detailed guidance issued to lawmakers on Friday, Dr. Monahan advised that members of Congress wear masks or facial coverings when they cannot stand six feet apart from one another.

At the White House, Mr. Trump’s new press secretary, Kayleigh McEnany, reinforced the impression that administration officials were getting preferential treatment when she delivered her first news briefing on Friday — without a mask. She is among the group of senior officials tested weekly, as all assistants and deputy assistants to the president are, an official said on Friday. Aides who are lower in rank are tested based on how often they are in proximity to Mr. Trump.

The White House medical unit, for its part, is keeping track of test schedules and results for each office in the complex. Both Mr. Trump and Mr. Pence have avoided masks in public in favor of stressing how many times they have tested negative for the virus. Visitors to the White House are also tested before they are allowed to be close to the president, including groups of business leaders and governors this week like John Bel Edwards of Louisiana.

“The governor and Alex Billioux, who is our assistant secretary of public health, both were tested for Covid-19 when they arrived and before they could go into the White House,” Christina Stephens, a spokeswoman for Mr. Edwards, said on Friday. “They also had their temperatures checked several times before entering the Oval Office.”

On Capitol Hill, even the party leaders are not getting that treatment.

Speaker Nancy Pelosi of California had not been tested as of Friday. Representative Kevin McCarthy of California, the top House Republican, has, but at the White House, where Mr. McCarthy attended an event with the president last week.

Senator Chuck Schumer of New York, the Democratic leader, has not been tested; he takes his temperature several times a day and advises those he talks to do the same. Aides for Senator Mitch McConnell of Kentucky, the majority leader, would not say whether he had been tested or not.

There are efforts to conserve at the White House. With so many aides reporting to work — and undergoing regular testing — the White House Management Office requests regularly that officials who are able to stay home should to adhere to social-distancing guidelines and to curb the number of tests being administered. Secret Service agents do not typically wear masks, but cleaning crew members do.

On Capitol Hill, the decisions have been left largely to Dr. Monahan, who has played a critical behind-the-scenes role throughout the pandemic in advising officials on how to stay safe. Under rules posted on his internal website and shared with The New York Times, lawmakers must exhibit symptoms, “have no alternative explanation for illness” and must have “a nexus to risk” to receive a test.

The tests are then sent off site to an unnamed “multistate national testing organization” for analysis — a multiday process.

Ms. Pelosi has said repeatedly that Dr. Monahan guides her decisions. This week, after Dr. Monahan warned Representative Steny H. Hoyer, the Democratic leader, that it might be risky for them to come back on Monday as scheduled, Ms. Pelosi abandoned plans to do so. The House will now return May 11.

“If the Capitol physician recommends that we not come back, then we have to take that guidance,” she said.

Mr. McConnell chose a very different course. He is bringing the Senate back into session on Monday amid a rising coronavirus caseload in the region. Mr. McConnell’s staff would not say whether the leader has spoken directly with Dr. Monahan.

On Friday afternoon, though, Mr. McConnell issued detailed guidelines to his colleagues based on Dr. Monahan’s recommendations, and thanked the doctor, along with other Senate officials, for working “hard to develop solutions so that the United States Senate can smartly and safely begin resuming our critical in-person work on Monday.”

In a memo Dr. Monahan circulated on Thursday, he offered advice for attending committee meetings. Wearing masks or face coverings was “strongly recommended” in situations where keeping six feet apart was not possible, he said, and he urged lawmakers to “use provided hand sanitizer” and “remain seated until the conclusion of the meeting, to the extent possible.”

“The face covering is likely to be most useful in preventing viral spread while a person is speaking,” the memo read.

Dr. Monahan, 60, is a quiet presence in the Capitol, where he oversees an office that functions as a full-service in-house medical clinic for those working in the Capitol complex, including in the Supreme Court. Dr. Monahan often accompanies House or Senate leaders on official delegation trips overseas, as the White House physician does with the president.

“He seems to be ubiquitous on Capitol Hill,” said Senator Chris Van Hollen, Democrat of Maryland, who lives down the street from Dr. Monahan in Kensington, Md., a suburb of Washington. “He really is everywhere and for us, he is always on duty. He’s 24/7.”

When Ms. Pelosi’s aides needed to figure out how to keep lawmakers safe while they passed a $2 trillion coronavirus relief package in March, Dr. Monahan worked with the sergeant-at-arms to come up with a plan for a “visual quorum,” a senior House Democratic aide said, in which lawmakers spaced themselves around the chamber and in the galleries above it.

Last week, when House members returned to the Capitol to approve a $484 billion aid package, Dr. Monahan advised that they vote in chunks of 60 people at a time, and recommended that they wear masks on the House floor. Most of the Democrats and many of the Republicans did. (Mr. McConnell has begun wearing a mask when he leaves and enters the Capitol, but not in the Senate chamber.)

Now, with senators about to come back to Washington, some are sounding nervous. Without sufficient diagnostic testing, they fear the Capitol — where senators are supported not only by their own aides but also a vast support staff of food service workers, custodians and other personnel — would become a mini hot spot for the virus.

In a letter to Mr. McConnell this week urging him to reconsider his decision to bring back the Senate, Senator Dianne Feinstein, Democrat of California, who at 86 is the oldest senator, cited Dr. Monahan.

“The attending physician of Congress, Dr. Brian Monahan, advised House leadership that he recommends against resuming their session,” she wrote. “Speaker Pelosi and Majority Leader Hoyer did the right thing by heeding this public health advice and are setting the right example for the country.”