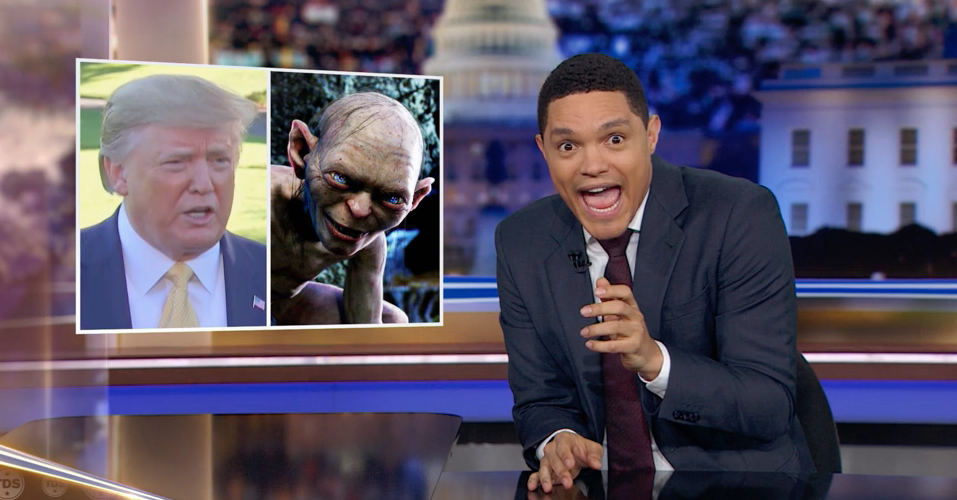 Welcome to Best of Late Night, a rundown of the previous night’s highlights that lets you sleep — and lets us get paid to watch comedy. If you’re interested in hearing from The Times regularly about great TV, sign up for our Watching newsletter and get recommendations straight to your inbox.

Speculation over Rudy Giuliani’s involvement with Ukraine has magnified since the arrest of two of his associates last week as they prepared to board a one-way flight out of Washington.

TONIGHT: Rudy Giuliani’s associates get arrested in connection with Ukraine, which makes us wonder: what came first, the criminal activity or the criminal aesthetic? pic.twitter.com/b9IYqzP3Pc

“Wow, this is crazy. Rudy Giuliani has friends? I didn’t see that coming.” — TREVOR NOAH

“Aside from being born with resting mug shot face, probably the biggest red flag with these guys was that they were buying a one-way ticket out of the country, which is always suspicious, all right? The only people who buy one-way tickets are criminals. And sky divers. That’s it.” — TREVOR NOAH

President Trump was evasive about Giuliani, his personal lawyer, as he spoke to the news media on Friday. The next day, he had lunch with Giuliani and called him a “great guy” in a tweet, deploring what he called “a one sided Witch Hunt going on in USA.”

“Donald Trump is all over the place. He’s like the Gollum of presidents. [imitating Gollum] We haven’t spoken to Rudies. We speak to Rudies all the time!” — TREVOR NOAH

“Is there such a thing as a two-sided witch hunt? Because, I don’t know — was there a group of witches that hunted down regular people?” — JIMMY KIMMEL

“So Trump and Giuliani are still a team. Whenever Donald Trump considers getting rid of Rudy, Rudy hypnotizes him with that giant pinkie ring he wears.” — JIMMY KIMMEL

“Today is both Indigenous Peoples and Columbus Day, depending on where you stand on slavery, I guess.” — JIMMY KIMMEL

“Columbus is basically the 1492 version of the people who write ‘First!’ in the YouTube comments section.” — JIMMY KIMMEL

The Bits Worth Watching

Desus and Mero watch the suspense build as a candidate for sheriff in South Carolina confesses to a few misdeeds … and then a few more.

What We’re Excited About on Tuesday Night

Also, Check This Out

One of the most popular members of the Addams Family — whose latest big-screen outing is now in theaters — is Wednesday. In adaptations across the decades, she has gone from cherubic little girl to frightening adolescent to lovesick teenager.