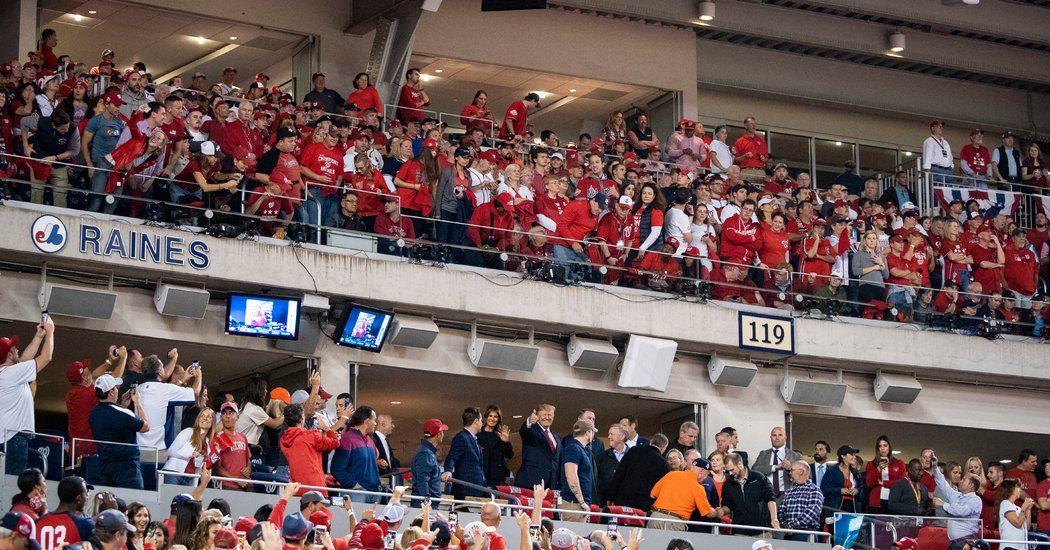 Most weeks my Mondays unfold in a well-practiced routine: brush teeth, wash face, walk dog. This morning, I added a new step: spend 15 minutes scrolling through Twitter to see whether anyone had synced that delicious footage of President Trump’s face falling on Sunday — as the World Series crowd is booing him — with the R.E.M. song “Everybody Hurts.”

I watched the video over and over, scrutinizing every second of the footage, waiting for the exact moment when Mr. Trump’s smirky grin gives way to stony petulance, the precise instant when he realizes that this sea of red-hatted Americans are not his red-hatted Americans, as the applause for veterans gives way to lusty boos, and the chants of “Lock him up!” ripple through the stadium.

It felt like medicine, like balm for a weary soul. It wasn’t until I’d watched the footage sped up, slowed down and from six angles and heard myself crooning, “Let me taste your tears!” that I started feeling a little sick, as if I’d gorged on Halloween candy.

I realized that I was gloating. It was not a pleasant realization.

The booing itself wasn’t the problem. The booing was appropriate. The booing was necessary, insofar as his trip to Nationals Park was one of the few times Mr. Trump has crept out of his self-made bubble and encountered something resembling the real world. When he eats out, it’s in a restaurant in a hotel he owns; when he plays golf, it’s at a club he owns; when he’s with a crowd, it’s his crowd.

Inside and outside of the White House, Mr. Trump has surrounded himself with sycophants and suck-ups, minions who stroke the emperor’s ego and assure him that his decisions are wise and his phone calls are perfect and his new clothes are absolutely the best. The boos were a reality check, real-life proof that it’s not just the “corrupt” media or the “do-nothing Democrats” who oppose him.

The booing mattered. So did the pointed snub of Mitch McConnell by Bobby Rankin, a pallbearer, at Elijah Cummings’s funeral (another video I watched more than once). So did John McCain’s refusal to have Mr. Trump attend his funeral.

But what about civility? the pundits cry. Funerals and sports should be partisan-free zones. What are we becoming?

Civility is a wonderful thing, when shared among equals. When people who have power require civility from those with less, or none, though, that demand is a cudgel, a weapon the haves use to keep the have-nots in line. When you’re confronted with evil, you don’t shake its hand or applaud it. If booing is incivility, bring it on. (And if you want to complain about incivility in America’s most pastoral pastime, start with Rob Drake, a Major League umpire, who just apologized for tweeting about his plan to purchase an assault weapon, “because if you impeach MY PRESIDENT this way, YOU WILL HAVE ANOTHER CIVIL WAR!!! #MAGA2020.”)

The booing is fine. It’s my own reaction to the booing that troubles me — the joy I took from Mr. Trump’s pain and the example it sets for my kids.

Donald Trump is a cruel, petty man who lashes out at his enemies in cruel, petty ways. He mocks their appearances, he gives them nasty nicknames, some with racist or anti-Semitic undertones. His fans take their cues from the counterpuncher in chief, gleefully creating memes that depict Mr. Trump as a fit, suave superhero shooting and punching, shooting and stabbing his way through a church full of enemies labeled “CNN” and “Black Lives Matter” or wearing Maxine Waters’s or Bernie Sanders’s face.

We — Democrats, liberals, progressives, the resistance, whatever you call the other side — are supposed to be better than that. We’re supposed to be the party of the downtrodden and the less fortunate. While Republicans support the fat-cat billionaires, we stand up for the workers. While they put kids in cages, we work to reunite them with their families. When they build walls, we say, All are welcome here. For them, the cruelty is the point. For us, kindness matters. When they go low, we go high.

Except, it turns out, going low feels wonderful. More than that, it feels effective and proper and just. If Mr. Trump is going to mock a reporter’s disability onstage, tell black and brown members of Congress to “go back” to where they came from and call Stormy Daniels “horseface,” then yes, we’ll boo.

If he’s going to praise a politician who body-slams a reporter as “my kind of — he’s my guy,” mock a sexual assault survivor in front of a jeering crowd and oh-so-casually raise his middle finger when a female astronaut dares to correct him, then indeed, we’ll indulge in a few rounds of “Lock him up.” If turning the other cheek is what has gotten us here, then let’s digitally affix Elizabeth Warren’s head to Gal Gadot’s body and show her throwing fake Trump through a window.

Part of me wants to believe that this is fair, and even necessary: If “going low” helped Mr. Trump take the White House, then we’d all better get in the mud to take it back.

But another part of me worries about the price of pragmatism, and the way I felt, watching the ballpark video over and over, thinking not just I hope that works but I hope it hurt. If we’ve got to smear and slime and meme and mock our way to victory, who will we be after we’ve won? When does a necessary evil become just evil?

Maybe we can take a stand and do what’s necessary without discounting the cost; go low when it’s required without reveling in the other side’s pain, taking care we don’t get stuck down in the dirt. Because if Donald Trump remakes all of us in his image, no matter who takes the White House in 2020, he will have won.

Jennifer Weiner is a contributing opinion writer and the author, most recently, of “Mrs. Everything.”